Are swords made to thrust or cut?

Time: Viking times until the 12th century
Appearance: Wide, medium blade length (average: 80cm). Wide groove (also called blood groove) over the entire length of the blade, only ends approx. 5 cm from the point. The location of the blade can be pointed, but it was usually rounded.

Appearance: The blade is slightly longer than the X-type. The fuller is a little narrower. 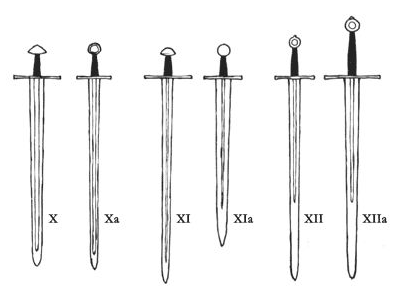 Appearance: Longer and narrower than the X-type but the fillet is narrower. The blade location is often pointed.

Appearance: wider and shorter blade, but the fuller is still narrow.

Appearance: Broad, flat and slightly tapered blade. To distinguish it from other similar swords:

1. noticeably pointed, the handle is short (no hand and a half).

Is the typical great sword (war sword) variation of Type XII. The handle can be grasped with both hands. 1.5 to 2kg.

Appearance: Predominantly parallel striking edges, ends in a rounded point. The handle is longer than the usual one-handed sword. The fuller goes about half the length of the blade; usually one fillet, but can have several. 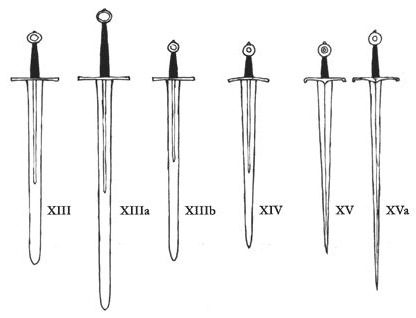 Very long blade, 80 to 100cm. Often referred to as the great sword or war sword etc.

Like Type XIII but with a short handle (one-handed).

Appearance: Very short blade, starting wide and tapering (usually) to a pointy end. The fuller usually extends over 3/4 of the length of the blade. Seldom also several fillets. The first five types are more for cutting / chopping than poking. With the advent of plate armor, swords became stiffer and more suitable for thrusting. Instead of the fullers and relatively parallel striking edges, the blades became more tapered with pointed ends.

Period: end of the 13th century to the beginning of the 16th century.

Appearance: Straight, tapering edges that end in a diamond-shaped point; suitable for thrusting.

Appearance: Similar to Type XV, with a narrower, slimmer blade. The handle is much longer, 18 to 23 cm (sometimes 26 cm). 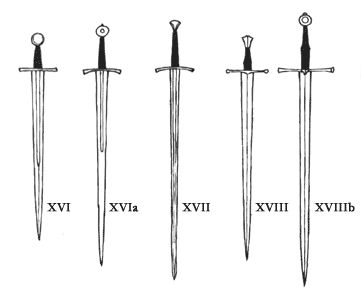 Time: This type was developed in response to the plate-reinforced chain mail in the early 14th century.

Appearance: The blades are usually between 70 and 80 cm long, with a distinctive fuller that is a little longer than half the length of the blade. The lower end has a pronounced diamond shape.

Appearance: Long, barely tapered blade, broad on the handle and often with a reinforcement point. The fillet is often pronounced, extending over a third (rarely more than half). The lower part has a hexagonal area. The handle is 15 to 23cm long and allows two-handed grip.

Appearance: The blade is long, narrow and tapered. The point is generally hexagonal. Many of these swords have a flat fuller in the upper quarter of the blade. The handle is long and allows two-handed operation. These swords were very strong and could weigh up to 2.5kg.

Appearance: The blades were quite wide (5 to 7cm) at the handle and aesthetically tapered to a sharp point. The handle is short (approx. 15cm) for one-handed guidance. The blades have a flattened end, often with a pronounced ridge for blade stiffness. This type of blade is good for cutting and slotting.

Appearance: This type is very narrow, has an average blade length of 80 cm. What distinguishes this sword from type XVIII is the handle, which is approx. 3 cm longer (approx. 18 cm).

Appearance: The blade is long and narrow, tapering to a point. And as with the other types of sword designs, it has a flattened diamond-shaped tip.

Like all swords of this type, it has a flattened diamond-shaped tip. It has a wide, approx. 85cm long blade. The handle can be grasped with one or two hands. 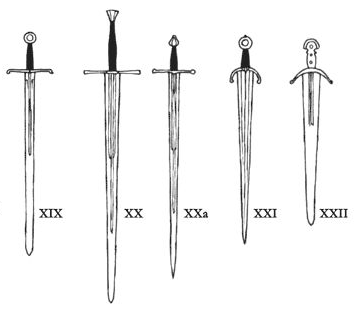 Time: beginning of the 15th century.

Appearance: This type has a wide, flat blade, the edges of which are parallel and suddenly end in a sharp point. It has a narrow fuller in the upper third of the blade. The point is hexagonal, the blade is flat with flattened cutting edges. It is designed for one-handed use.

Appearance: These swords are hand and a half swords, like Type XIIIa. The wide blades have almost parallel cutting edges that gradually taper to a point. The blade has a fillet over more than half the blade and two parallel fillets in the upper quarter of the blade.

Appearance: This sub-type has a less wide blade that tapers to a fairly sharp, pointy end.

Appearance: The handle corresponds to that of a one-hander. The blade gradually tapers to a pointed end. Typically, the blade has a couple of wide fillets at the top of the blade or two fillets along most of the length of the blade.

Appearance: wide, flat blade. The cutting edges taper in a balanced manner to a pointed end. It has two short, deep, closely spaced chamfers below the handle.