The iPhone 8 is rock solid, has good cameras, and works at a good pace. The design is old-fashioned with thick bezels and a comparatively small display, there is only one camera lens (no telephoto). However, if you are looking for a handy iPhone, you are right with the iPhone 8: The workmanship is high-quality, the glass back looks classy and the photos are impressive. Wireless charging is possible, fast charging also with a suitable power supply unit and USB-C Lightning fast charging cable. Attention: No jack socket. (Grade 2.4 according to the test procedure valid until the end of 2019.)

Read product reviews on Amazon
A new era began for Apple in 2017: the iPhone X was the first iPhone to swap the home button and fingerprint sensor for gesture control and Face ID face recognition. For fans of the home button, however, the iPhone 8 was introduced at the same time. With the current series of iPhone 12 and iPhone 12 Pro, the home button seemed to be dying out - until Apple presented the second generation iPhone SE at the end of April 2020, which outwardly resembles the iPhone 8 like one egg to the next (here is a direct comparison: iPhone 8 vs. iPhone SE). Still, is there a reason to buy the iPhone 8? 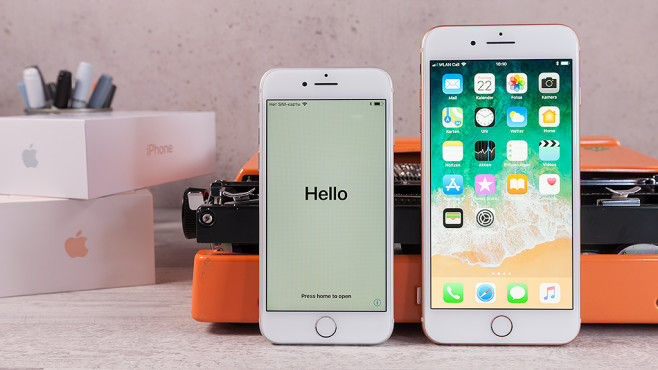 After the iPad Pro, the iPhone 8 and 8 Plus also have Apple's True Tone function. They should represent colors as naturally as possible, depending on the ambient light.

(Alarm) level red in pictures: iPhone 8 and 8 Plus as Red Edition

The screen of the iPhone 8 is (like the iPhone 7 and SE) 4.7 inches and offers the well-known retina resolution (1334x750 pixels). The contrast of 1,430: 1 is on the same level as the iPhone 7 (1438: 1) and only slightly lower than the iPhone SE and 11 (both around 1,660: 1). However, it cannot keep up with the high contrast values ​​of the OLED displays of the iPhone 12 models. Like the iPad Pro and the iPhone SE, Apple equips the smartphone with the true-tone display, which is supposed to display colors more naturally.

iPhone 8 and iPhone 8 Plus in detail 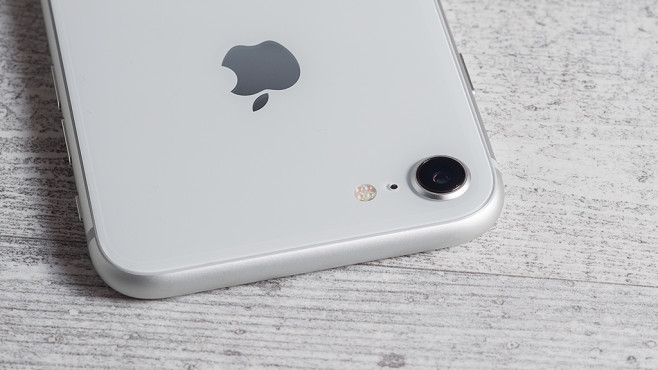 The Apple iPhone 8 has a single lens - but the iPhone 7 already impressed with good photos even in poor lighting conditions.

Despite the same resolution (12 megapixels) as on the iPhone 7, the camera of the iPhone 8 has changed and offers a larger photo sensor, for example. The iPhone SE supposedly uses the same camera hardware as the iPhone 8, but thanks to the A13 Bionic processor, the image processing system is much more powerful - that's why night mode is only available in the newer iPhone SE. Overall, the iPhone 8's camera is better than that of the iPhone 7m, but does not keep up with that of the iPhone SE in low light. The iPhone 8 lacks a telephoto lens - this is only available in the iPhone 8 Plus (deleted from Apple's range, available from third-party providers). The iPhone 8 dispenses with the optical zoom; as well as functions related to the dual camera, such as portrait photo mode and depth of field effects. On request, the smartphone can film in 4K - optionally with 24, 30 or 60 frames per second. Slow motion videos are recorded with 240 frames in full HD resolution; the iPhone 7 only allows this with a 720p resolution. The sharpness of the video recordings was convincing in the laboratory test: the filmed pairs of lines showed no inaccuracies, so the image was crisp. 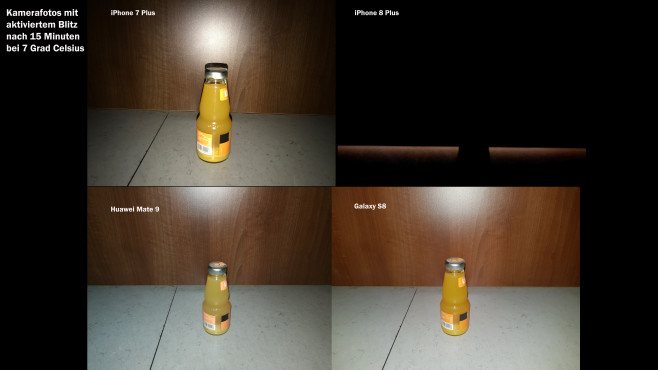 The COMPUTER BILD testers kept various cell phones in the refrigerator for 15 minutes at 7 degrees Celsius. Then they took a photo with the camera app in the dark with the flash function activated.

iPhone 8: Lightning fails in the cold

The camera in the iPhone 8 has an obscure weakness: it doesn't like the cold. If the cell phone is exposed to temperatures below about 7 degrees for some time, the flash will no longer work. COMPUTER BILD got to the bottom of the matter and put a number of cell phones in the refrigerator (7 degrees Celsius) for 15 minutes. The testers then activated the flash in the camera app and took a photo in the dark. Result: While the iPhone 7 Plus, Samsung Galaxy S8, Huawei Mate 9 and OnePlus 5T took a picture with activated flash lighting as desired, it remained dark on the iPhone 8, iPhone 8 Plus and iPhone X! After all: after around 30 seconds in a warm environment, such as in your pocket, it worked again. This means: If you don't carry your iPhone directly on your body in winter, you won't take photos with flash on cold days. Amazing: According to a support document from Apple in March 2019, the iPhone works at temperatures above 0 degrees Celsius - more precisely: in the intended operating temperature range between 0 and 35 degrees Celsius.
<?