Attacks on Buddhists in Bangladesh

Buddhist temples and houses have been burning in southeastern Bangladesh for days. The outbreak of violence by alleged Islamists is said to be due to a specific case of insulting the Koran on Facebook. As a result, thousands of people destroyed Buddhist shrines and set houses on fire. Also some Hindu temples were not spared from the wave of violence.

Cover from the very top? 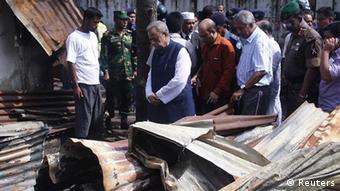 The attackers are said to have been well organized and armed, as Sushil Barua of the minority organization BHBCWF (Bangladesh Hindu Buddhist Christian Welfare Front) claims that they "attacked Buddhist institutions with trucks and other vehicles. They even had gasoline and gunpowder with them. So you can realize that they were prepared for a long time. "

Barua accuses the police and authorities of standing by while the destruction was going on. Even the interior minister Mohiuddin Khan Alamgir is said to have played a decisive role, as he is said to have consistently promoted Islamist groups in the region - for example in the mass protest against the humiliating film in the USA. In the meantime, one of those affected has filed a complaint against the police in Dhaka.

Even after the first wave of violence over the weekend, the authorities are said not to have prevented further attacks. Only on Tuesday, three days after the outbreak of the riot, did the Minister of the Interior declare that 300 people had been arrested in the course of the riots. They were "radical Islamists", but "Rohingya and political opponents of the government" were also involved in the unrest. The Rohingya are Muslim refugees from neighboring Myanmar.

Sushil Barua criticizes the in his opinion too late intervention of the security authorities and even suspects intent behind it: "The government has failed on many levels. The people are deeply angry. Therefore the government is now trying to draw attention to its mistakes by making them fueling religious unrest. "

Nowhere in Bangladesh is the country's religious, linguistic and ethnic diversity more visible than in the southeastern border area. Many ethnic groups live on both sides of the borders with India and Myanmar. Buddhists make up less than one percent of the total population in all of Bangladesh. In the region around Chittagong they make up almost 45%. Islam and Hinduism are the dominant beliefs in both Bangladesh and the neighboring Indian state of West Bengal.

The wave of refugees from Myanmar that has been going on for years is also changing the demographic composition of the region considerably. As a Muslim minority in neighboring Myanmar, the Rohingya feel persecuted and seek refuge in Bangladesh. The government in Dhaka has long tried to elevate the problem to an international crisis and thus to transfer responsibility to international organizations. The refugees also feel excluded in their new home. The government has even banned some aid organizations from providing direct support to the Rohingya. 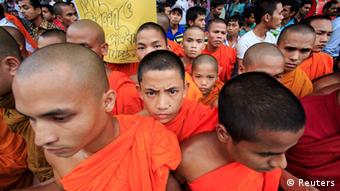 Under these circumstances, Islamist groups often try to take advantage of the frustration of these Muslims and incite them against the religious minorities in Bangladesh. Sushil Barua from the minority organization BHBCWF points out that such Islamist groups are strongly represented in almost the entire border area of ​​Bangladesh. After the recent wave of violence, Interior Minister Alamgir himself reinforced this suspicion: "We have made sure that the Rohingya refugees are not allowed to communicate with local people without our permission."

The attacks on Buddhists have sparked outrage in broad sections of society. Civil society representatives speak out and condemn the acts. The opposition party BNP is also demanding that the attacks be fully investigated. Mirza Fakhrul Islam Alamgir, the party's deputy general secretary, said: "One must ask why the wave of violence did not stop even after the interior minister visited the site. We are demanding an investigation by a neutral judge." The former coalition partner of the BNP, the Islamist Jamaat-e-Islami, has also condemned the attacks.

The latest events are hotly debated on Facebook, Twitter and numerous blogs. The majority emphasizes that Bangladesh belongs to all Bengali living there, regardless of their religious affiliation.