What is FSI and enhancement of FSI 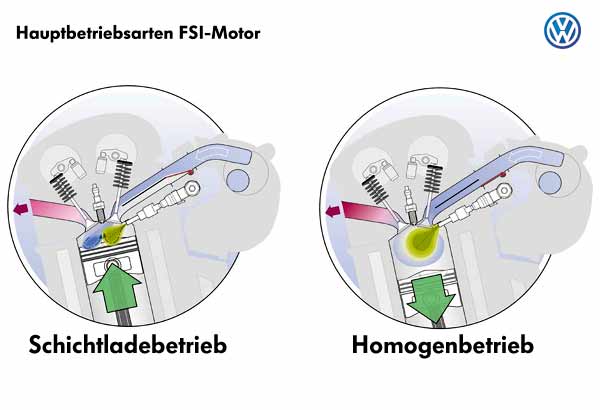 In order to be able to realize this high excess air, which has a beneficial effect on fuel consumption, the engine has to work in the so-called

With the Volkswagen FSI engine, a switchable is used to display a targeted air flowTumble system used. The so-called "tumble plate" divides the air inlet duct into an upper and a lower half. An upstream flap (see below) allows the air to be routed either only over the upper part or over the entire cross-section:

In stratified charge mode, the flap is closed, creating an intense, cylindrical flow in the combustion chamber. In this mode, the fuel is only injected in the last third of the piston upward movement. Due to the combination of targeted air flow and the special geometry of the piston, which has a pronounced fuel and flow trough, the particularly finely atomized fuel is optimally concentrated around the spark plug and safely ignited in a so-called "mixture ball". The engine management system ensures that the injection parameters are optimally adjusted (injection timing, fuel pressure).

At very high speeds or loads, the FSI engine works in the same way as a conventional engine with manifold injection, but with better efficiency due to the higher compression. The fuel is injected into the intake stroke so that the fuel-air mixture can be prepared in the best possible way. In order to be able to offer the engine the maximum amount of air, the flap is opened - the entire cross-section of the air inlet duct is available.

The currently determined consumption values ​​are less than five liters for the Lupo FSI with a lightweight body and direct shift gearbox and approx. 5.6 liters for the Lupo FSI in the normal version. The CO2 values ​​are very low at 119 g / km and 134 g / km (1st generation). Unfortunately, it should also be noted that economical consumption is only achieved if the vehicle is mainly driven in stratified charge mode. Often the entire potential for savings is used up if you drive briskly. A lot of development work is certainly necessary here in order to achieve a savings miracle from the gasoline DI, as with the diesel direct injection engine.

In order to ensure optimal pollutant conversion even in the operating phases with high excess air, Volkswagen uses a NOx storage catalytic converter in combination with a NOx sensor in the Lupo FSI.

Description of the exhaust system 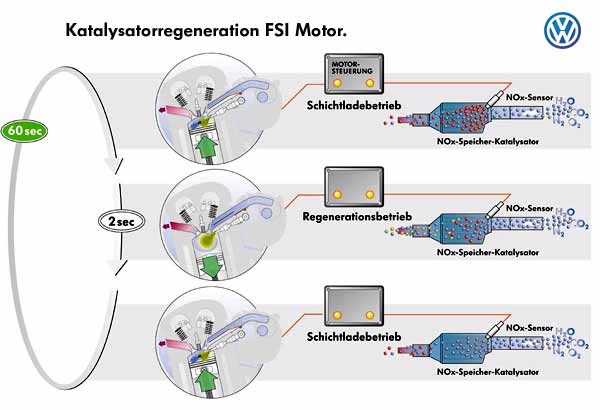 Special features of the Audi FSI

In the Audi FSI, the tumble flap is infinitely adjustable, the pump is regulated like in the Golf. 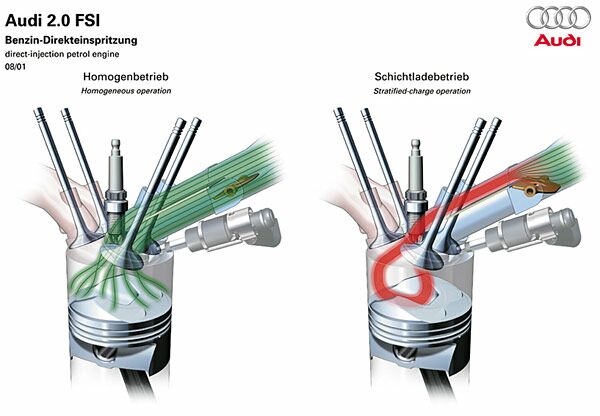 What is different about the Golf FSI?

It works with 3 operating modes:

in the Stratified charge operation At low load and speed, the throttle valve is fully open to reduce gas exchange losses, the tumble valve in the intake duct is closed, the air is accelerated and swirled. The injection takes place shortly before the ignition, an ignitable mixture is created around the spark plug, while an insulating air cushion (reduction of heat loss) lies around the outside (cloud lambda = 3). The piston crown helps with the turbulence.

In the transition areaHomogeneous lean operation

the injection occurs earlier, the switching flap is closed, lambda = 1.4. There is no EGR.

in the Homogeneous operation from 3000 l / min combustion takes place at lLambda = 1 (homogeneous). The behavior is similar to the naturally aspirated engine, injection already takes place in the intake stroke, the switching flap is open. The regulation takes place through the throttle valve. The better internal cooling results in a higher compression (approx. 12: 1). The pressure of the radial piston pump is between 50 and 110 bar. 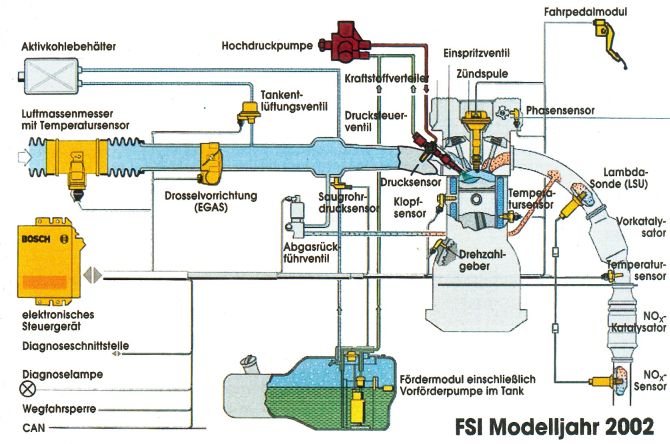