How to calculate steel in construction

Market leader in metal: iron and steel in construction 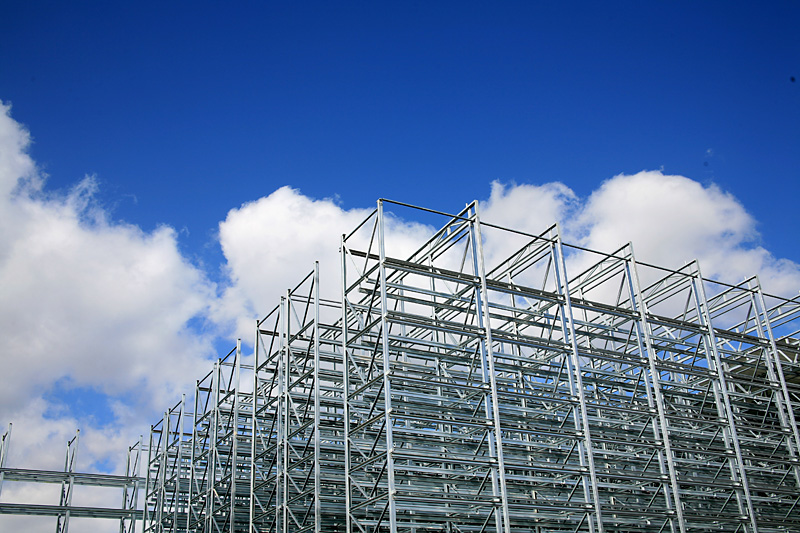 Construction metals part 1: Ferrous materials are of great importance in modern construction. No metal is used more often. This applies in particular to the refined material steel, which is obtained from iron. Steel is ubiquitous in industrial construction, for example, and is used there for profiles and supports or for roofing and facade cladding. The material also plays an important role as reinforcement in reinforced concrete construction. But what is the difference between iron and steel and how are the two materials obtained?

The earth's crust is estimated to be 4 to 6% iron. However, the metal is rarely found there in its pure form. Most of the time, the iron atoms have reacted with oxygen and have become iron oxide. In addition, these iron oxide crystals are usually only found finely distributed in rock blocks - in so-called iron ores. So if you want to extract pure iron, you have to have the technical means to get the substance out of the ores. At least since the beginning of the Iron Age around 800 BC. BC mankind obviously knows how to do it. Even then it was possible to smelt iron ore and use it to extract liquid iron for forging objects such as tools, armor or weapons.

However, pure iron is too soft a material for most applications in construction. The raw material is therefore alloyed to make it harder. An alloy is the refinement of the metal with the help of elements such as carbon, sulfur and silicon as well as other metals. Incidentally, these alloying elements do not form a solid chemical bond with the iron, rather they achieve their effect through loosely embedded in the crystal structure of the iron.

Carbon in particular plays an important role as a hardener. It makes the iron stronger, but also more brittle. A greater hardness can also be achieved by alloying iron with metals such as manganese or tungsten. An alloy with chromium, nickel, aluminum or copper, on the other hand, makes iron more rust-resistant. There are also numerous other alloy options. In this way, ferrous materials with a wide variety of properties can be produced. Iron alloy creates new materials with improved properties. If the iron has been enriched with a carbon content of more than 2.06%, it is called cast iron. It is often used in construction, for example, for manhole covers. Cast iron is very pressure-resistant and also less susceptible to rust than normal steel. On the other hand, the material is extremely brittle and therefore prone to breakage under tensile and bending stresses. In addition, cast iron cannot be cold worked and cannot be forged because of its high carbon content. Shaping can only be done by pouring the molten material.

The latter is one of the biggest differences to steel, which can be deformed cold and hot. Steel is by definition iron with a carbon content of less than 2.06%. In structural steels, the carbon content is usually between 0.1 and 0.5%. Since industrialization brought modern forms of steel production, steel has been by far the most frequently used metallic material. It has replaced the old cast iron in most areas. In practice there are - depending on the type of alloy - an almost unmanageable number of types of steel with the most varied of properties. They all contain iron as the main component as well as the aforementioned carbon. There are also other metal and non-metal admixtures. For steel production, the mostly fine-grained natural iron ores are sintered in a first step. This means that they are melted with the addition of substances such as coke and limestone and thereby "baked" together into larger lumps. In this form they are more suitable for the blast furnace, where the iron ore is alternately piled up with layers of coke and then melted again at temperatures of up to 1,500 ° C.

The treatment in the blast furnace melts the rock in the iron ore. Since they are lighter than pig iron, they float on it and can therefore easily be separated off as slag. At the same time, a large part of the oxygen escapes from the iron oxide compounds. Instead, the now purer iron has absorbed carbon from the fuel coke. In most types of steel, the carbon content is reduced again in the course of further production steps.