A little drier in the west

In some regions, a high brings slightly drier weather for a short time. The next low is already ready. A strong wind then blows at the weekend. Even squalls are possible. 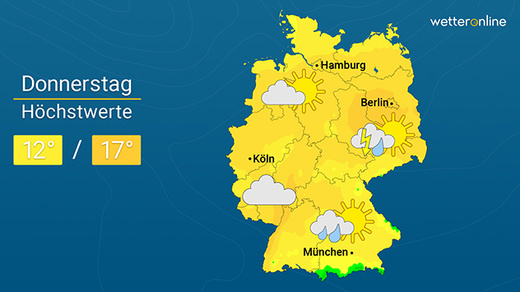 In the western half, the showers will temporarily subside today.

Today, from the Saarland to the East Frisian Islands, the weather is mostly dry and quite friendly. However, the rainy weather of the past few days continues, especially in the eastern parts of the country. Individual thunderstorms are also possible locally. During the day, thick clouds come in from the west again and bring some rain with them at night. The maximum values ​​reach 14 to 18 degrees.

Tomorrow a storm low is approaching from the British Isles. A strong wind is blowing in many parts of the country. From northern North Rhine-Westphalia to Rügen as well as in the south it is already changeable in the morning. Otherwise there are only a few showers until noon. In the afternoon the downpours intensify, and there are also lightning and thunder in some places. In the middle of the country, the risk of rain is probably not that high. The thermometer shows values ​​up to a maximum of 19 degrees.

The storm low arrives at the North Sea on Saturday. It brings windy to stormy weather across the country. It is also changeable. In the vicinity of showers and thunderstorms, squalls of over 75 kilometers per hour are possible. The April weather will also be preserved on Pentecost Sunday and Monday.

(A report by Sebastian Keßler from the WetterOnline editorial team)