Published on July 17th, 2015 by Wilfried Müller on Wissenhaben.de 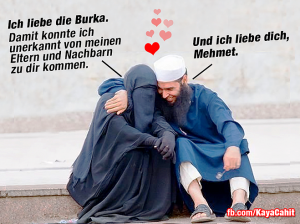 Before we get to the ridiculous part, first the state of our favorite religions. The following links do not need to be commented on (picture: fb.com/Kaya Cahit):
Iran: Hell on earth for gay men (HUFF POST 15.7.) And on all continents - Catholic bishops: Worldwide fight against marriage for everyone (QUEER.DE 14.7.)

On July 13th a Turkish scholar of Islam achieved the joyous success that his religion deserves. The Swiss side 20 minutes brought that as forbidden sex practices trigger laughing fits: A TV show explains what Muslims are not allowed to do during sex. “Oral intercourse in advanced proportions” is also taboo. The moderator then laughed at the Islamic scholar.

Reason enough for 20 minutes for a few minutes of research on sex, prohibition, and ridicule. Under the heading Sex and religion brought the site to the 14.7. the research results Which God allows how much pleasure?
From the content:

Christianity
The Bible prohibits masturbation and homosexual intercourse between men, and the Catholic Church goes one better. In the 19th and 20th centuries, Catholic moral theology became loud 20 minutes deals in detail with questions of permitted and prohibited sexuality. Hence no artificial contraception, and sex only with reproductive intent - otherwise it is a sin. That should probably represent the height of ridiculousness.
The new Pope Francis is now making a difference, he had believers all over the world questioned about marriage, family and sexuality. As a result, there is a Catholic debate about "any new interpretations of sexual morality", and the "universal church" wants to discuss the topic at a synod in autumn. That should be another peak of ridiculousness.
The Protestants don't need it, for some time now they have refrained from “looking into people's bedrooms”. Only the evangelical free churches still do something like that, they are averse to all modern positions in relation to sexuality. The Fundis are generally in a bad position with their oral lusts. They have nothing to laugh about themselves, but they are a popular object to be laughed at.

Hinduism
In Hinduism, it loves itself rather carefree. Traditionally, you have a tolerant relationship with sexuality. You can read it in the Kamasutra. Although today not every Hindu has a copy of this erotic textbook on the bedside table, there are hardly any limits to the imagination. There is no mention of prohibited sexual practices in Hinduism.
Traditionally, however, sex is only intended within the marriage. This is no longer seen so closely today, because sex is generally a private matter. What happens in your own four walls by mutual agreement is okay. There was no mention of the gangs raping Indian girls for not following traditional dress codes. Also no talk of the general contempt for women within the Hindu caste system and its "ideas of purity" with the prohibition of premarital sex. The cheerful mood probably doesn't quite apply.

Buddhism
On the Buddhist side, there are hardly any sex regulations. Those who apply the principles of religion to the bedroom pay attention to empathy and a sense of responsibility. In Buddhism nothing is explicitly forbidden or allowed in bed. Even practices like sadomasochism are loud 20 minutes ok with mutual agreement. Tantrism (developed from Hinduism and Buddhism) even understand sexuality as a means of expanding experience and awareness.
On the other hand, sexuality in Buddhism has a more negative position, because "whoever pursues his sexual inclinations increases his mental poisons." On the way to Buddhahood and nirvana, however, one should overcome all worldly desires - including sex (from FOCUS ONLINE From Celibacy to Kamasutra - Sexuality in Buddhism.
Most Buddhist marriages in Southeast Asia are loud Focus arranged, and sex in marriage is reserved for procreation. If you do it differently, like the Tantrists, you better pay attention. Much of society does not accept this form of Buddhism, he said Focus. A long philosophical preparation is also necessary for this, not mere lustfulness. In the end, that's pretty ridiculous.