How was Japan 10 years ago

10 years ago: The triple disaster of Tōhoku in Japan

The tremendous tremors lasted two and a half minutes Seaquake the magnitude 9.1, which led Japan into a disaster of unimaginable proportions on March 11, 2011. The cause was the sudden submergence of the Pacific plate under the southern foothills of the North American plate. The result was numerous damage to buildings, and buildings even collapsed in Tokyo, 375 kilometers from the source of the quake.
It is considered to be the strongest earthquake since the beginning of the record history of Japan, and as the third strongest (together with the Sumatra-Andaman earthquake of 2004) worldwide ever recorded earthquakes.

About 20 minutes later, one generated by submarine mass displacement reached 10 meters high Tsunami-Tidal wave on the east coast of Honshu (local maximum wave heights up to 40 meters), which devastated a coastal strip up to several kilometers wide over hundreds of kilometers in length. Entire villages and regions were completely erased, ships washed ashore, burning houses carried away by the masses of water. Wave heights of five meters were also measured in some bays in Indonesia and the USA. It was the largest known tsunami event in Japanese history.

The mega-quake and tsunami caused another tragedy: for the first time in the history of nuclear reactor technology, there was an accident as a result of a natural disaster.
The Fukushima Dai-ichi nuclear power plant located on the coast (163 km from the epicenter) suffered only slight earthquake damage, the Disaster but triggered the tsunami up to 15 meters high. The six-meter-high tsunami protective walls were designed far too low. As a result of the reactor blocks flooded five meters deep and the emergency power generators submerged, the cooling systems failed. Within a few days, three reactor blocks exploded, there were several core meltdowns and fires, radioactive substances were released and contaminated workers and the surrounding population. Japan classified the accident in the highest danger level 7, so it was as serious as the meltdown in Chernobyl, even if only a fraction of the amount of radiation was released. On March 22, 2011, the ZAMG was the first institute in the world to publish a comprehensive and correctly sized estimate of the release of radioactive substances from the damaged nuclear power plant and calculations of the global spread. The released radioactive substances were also detected in Austria in small quantities.

As Victim record After the triple disaster in Tōhoku (named after the Japanese region), the Japanese police agency announced the following figures: 15,899 fatalities, 2,527 missing, 6,157 injured, 470,000 evacuated, 320,000 homeless, 121,992 destroyed and 730,392 damaged buildings and over 200 landslides. The tsunami was responsible for the main cause of death and most of the damage. 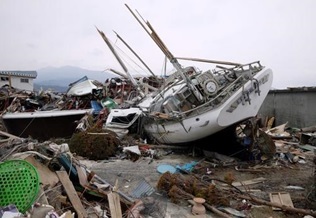 The thinner, heavier oceanic Pacific plate dips below the continental plate at a rate of 8.3 cm per year, and at an extraordinarily steep angle. Through this process, the overlying plate on which the Japanese island arch rests is bulged and stretched, and its lower layers are compressed. The sinking oceanic tectonic plate, in turn, is slowly pushed forwards and upwards. As a result of the megaquake, the upper part of the stretched plate jerked eastwards. Extensive subsidence has also occurred in some areas of Honshu, increasing the risk of coastal flooding.

As an expedition team to the 7.5 km deep Japan trench was able to determine, there was a vertical displacement of the crust blocks of up to 50 meters in the area of ​​the fracture zone. This led to enormous blocks of seabed sliding down the flanks of the submarine rift. Due to these sagging sediment packages, the plate boundary shifted about three kilometers to the east, a gigantic extent! The tsunami was generated by the resulting displacement of water as a result of the mass displacement.

The sudden shift in mass even shifted the earth's axis, more precisely the figure axis, by about 17 cm, as stated by NASA. The earth also turned a little faster and the length of the day was shortened by about 2 millionths of a second. But the earth's rotation is subject to constant, sometimes much stronger fluctuations, which can be attributed to atmospheric winds and ocean currents, among other things.

Climate-damaging gases in the atmosphere

The Tōhoku earthquake and tsunami also left traces in the atmosphere. From destroyed buildings, technical devices such as refrigerators and air conditioning systems, as well as industrial systems, 6,600 tons of halogen compounds were also released, as researchers report in the specialist magazine "Geophysical Research Letters". These substances can damage the ozone layer or accelerate global warming. The researchers report that there was a loss of ozone in the atmosphere, which was almost 40 percent higher than the value of the previous year.

A NASA team realized that the tsunami had an impact on the ice shelf even in Antarctica, as radar images from the environmental satellite Envisat have shown. The waves were only about 30 cm high when they reached the Antarctic ice shelf after 13,000 kilometers, but the extremely long wave trains exerted such a total pressure that the ice could no longer withstand and icebergs broke off. The largest of these icebergs has an area of ​​around 60 km2 and a thickness of about 80 m.

Aftershocks continue to this day

The main quake on March 11, 2011 was accompanied by tens of thousands of aftershocks.

As a result of the main earthquake, most of the stress is relieved by the displacement at the fracture surface, which was about the size of Austria. Therefore, there are only a few aftershocks within the main fracture area. However, this results in a considerable increase in stress, particularly at the edges of the fracture. At adjacent smaller faults, both in the continental North American plate and in the submerging oceanic plate, these areas gradually relax, which happens on the one hand via creeping processes and on the other hand via aftershocks.

Particularly noteworthy is the earthquake of February 13, 2021, which occurred almost exactly after 10 years with a magnitude of 7.1 and was classified as an aftershock by the Japanese earthquake authority. It is one of the five strongest aftershocks since 2011. However, the energy was only about a thousandth of the main quake. One fatality and 185 injured, no tsunami was generated.

The aftershocks of magnitude 7.1 registered by the ZAMG earthquake service at all stations moved the ground in Austria, 9,000 km from the epicenter, by up to 0.4 mm. In comparison, this movement made up to one centimeter in Austria in the case of the main earthquake. However, due to the long periods of the seismic waves at such distances, these movements cannot be felt by the population.

Animated representation of the seismograms of the Tōhoku earthquake in 2011 at three stations of the ZAMG earthquake service (CONA - Conradobservatorium in Lower Austria, DAVA - Damüls in Vorarlberg, SOKA - Soboth in Styria).

The fastest seismic wave, the longitudinal wave, takes a little more than twelve minutes to get from the hypocenter in Japan to the earthquake stations in Austria. This wave start can be seen in the seismogram at around 650 seconds. The slower shear wave arrives about ten minutes later, at about 1300 seconds. Both are sky waves and propagate inside the earth's body. Another 15 minutes later, the surface waves arrive in Austria, they only propagate on the earth's surface at a slower speed than the sky waves. Their arrival can be seen in the seismogram at 2300 seconds.