What part of the brain thinks

The anatomy of intelligence 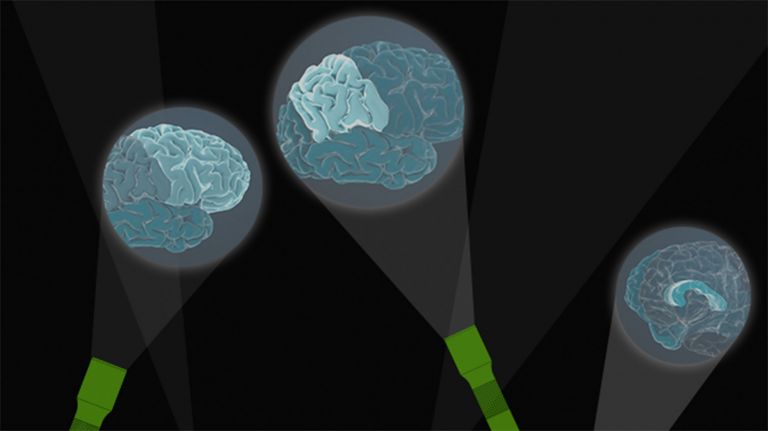 More brain doesn't mean more brains. A good connection and communication between certain convolutions of the brain does. The anatomical network of intelligence links centers in different lobes of the brain.

Williams-Beuren syndrome (WBS) is a genetic peculiarity caused by the loss of a piece of chromosome 7. People with WBS have several neurobiological abnormalities, including a brain that is about 20 percent smaller. Although cognitive impairments of varying severity are common, people with WBS show above-average aptitude in certain cognitive areas despite an overall low IQ (average: 60). Language skills often develop particularly early and strongly; Facial recognition and memory also shine with special interests. On the other hand, impairments occur in spatial imagination and in the ability to concentrate.

Where in the brain is intelligence hidden? Brain maturation provides the first indications in fast motion. In 1958, the Swiss psychologist Jean Piaget (1896-1980) described how intelligence unfolds in four stages: Everything begins with sensorimotor intelligence in babies and toddlers, which primarily serves to master movement sequences. On the next level, the little people on earth increasingly develop sensory and language skills, the ability to more complex thought processes and are finally able to do abstract thinking in the 10th to 12th year of life.

Almost a decade later, the American biophysicist and brain researcher Herman T. Epstein (1920−2007) linked these phases with growth spurts in the brain, each of which initiates a new phase of development. Motor skills centers mature at the age of three to ten months, and sensory centers follow in preschool age. And two more growth spurts around the age of six and ten create increasingly complex and intensive connections between brain regions with different cognitive skills.

In the search for the seat of intelligence in the mature brain, it is first necessary to identify some dead ends in research. The first impresses with its simplicity: Can't you just explain more intelligence in terms of more brain? Darwin's cousin and contemporary Sir Francis Galton (1822-1911) was one of the first to focus the searchlight on brain size. He compared the skull dimensions of over 1000 students with their exam results. Lo and behold: the skulls - and thus, he concluded, the brains as well - of the students with the best grades were two to five percent larger. Later Galton even tried to prove that the size of the skull could reveal differences in intelligence between different races.

Mass alone is not enough

But even if this assumption has now been refuted, it is not possible to deny any connection between brain size and IQ. About 15 percent of the differences in IQ can actually be explained in terms of brain size. However, this does not mean that you can infer your IQ from the size of the skull or the volume of the brain. This is also shown by the comparison of the size of the brains of two equally astute writers: the brain of the Irish writer Jonathan Swift (1667−1745), at 2000 cubic centimeters, was well above the human average of 1360 cubic centimeters. In contrast, the French Nobel Prize laureate Anatole France (1844−1924) looked like a shrunken head with only 1,000 cubic centimeters.

The gray and white mass of the brain alone does not make you smart. But where in the abundance of twists and turns is detailed detective work worthwhile? One of the first candidates for closer inspection is the frontal lobe. For a long time it was believed that this front part of the brain grew the most in the course of the incarnation. This has now turned out to be a fallacy. However, in positron emission tomography scans, parts of the frontal lobe are particularly active in numerous tasks that serve to measure intelligence.

On the other hand, the Canadian psychologist Donald O. Hebb (1904−1985) showed as early as the 1930s that the frontal lobes alone can hardly matter. His examinations of patients from whom large parts of it had been removed showed that the IQ was unaffected by these losses. Tracking intelligence on the basis of brains that deviate from the norm either from birth or due to accidents, however, also proved to be a popular trick in the further search. The German neurologist Hans Helmut Kornhuber (1928−2009), for example, concluded from studies on children with damage to the cerebral cortex that every percent of tissue destroyed is accompanied by a reduction of three to four IQ points. Efforts to assign abnormalities in the brain structure of those affected to cognitive peculiarities have not yet produced a clear picture. Intelligence cannot be located in a few turns of the brain. 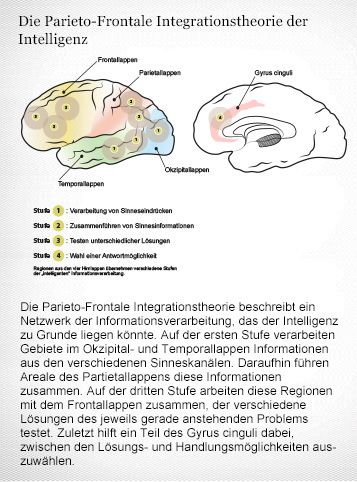 The triumphant advance of the brain scanners allowed the US psychologists Richard Haier from the University of California and Rex Jung from the University of New Mexico to make an important discovery in 2007: The evaluation of more than 30 imaging studies showed "in striking agreement" on a decentralized network in the Brain. Its structural expression and activation enable a reliable prediction of intelligence performance in mental tasks. Your model sounds a bit like a sports program, but is exclusively dedicated to the mental muscles: "P-FIT" (Parieto-Frontal Integration Theory) describes a network that is self-contained composed, among other things, of parts of the frontal and parietal lobes. The P-FIT components contribute different ingredients to cunning.

Haier and Jung also assign several levels of "intelligent" information processing to them. For example, different regions of the network initially process sensory impressions in the first stage. This sensory information is brought together and evaluated on the following levels. Among other things, areas in the frontal lobe test different solutions for the problem at hand.

Since then, many other studies have largely supported P-FIT and added a few components. In 2010, for example, a team led by the psychologist Jan Gläscher from the University Medical Center Hamburg-Eppendorf examined 241 patients with damage in different brain regions. Their investigations showed that damage in the P-FIT areas particularly impaired intelligence. Characteristics that support effective working memory also played an important role. Above all, this includes a well-developed white substance between the parietal and frontal lobes, which consists of nerve fibers wrapped in myelin sheaths.

The myelin layer isolates the nerve processes and thus enables faster signal transmission and thus better communication between the P-FIT centers. A particularly well-developed connection between the hemispheres of the brain also linked several works with higher intelligence.

What has only emerged in many studies and when modern imaging methods are exhausted is anecdotally confirmed by a look back into the era before the brain scanner: the old-fashioned analysis of Albert Einstein's brilliant brain, which was first photographed in 1955 and then cut into 240 cubes, fits great for P- FIT. Potential abnormalities include particularly complicated folds in the frontal lobe, as well as a missing furrow in the parietal lobe, which may shorten communication paths between nerve cells. And last but not least: a particularly strong connection between the hemispheres of the brain.