How can you explain GDP

The GDP includes the value of all goods and services that are created within a year within the national borders of an economy. The German calculation also includes all benefits from foreigners within Germany, but does not take into account benefits from residents that are provided abroad.

GDP is a measure of the economic performance of an economy during a certain period of time. After all, it encompasses the value of all goods and services that are produced in an economy within this time frame. Among other things, the GDP measure economic growth become. For this it is necessary to be pure nominal GDP adjusted for inflationto convert into a real GDP. Its development then denotes economic growth.f

In principle, it is possible to relate GDP not only to individual countries. An expansion of entire economic areas such as the EU or Southeast Asia is also possible in principle. However, this requires a sometimes quite complex conversion of the value of the services and goods into the other currencies. Nevertheless, comparisons between two different economies can be made on the basis of GDP. The conversion of GDP to a per capita value is particularly useful here, so that, for example, the prosperity of the countries can be compared. 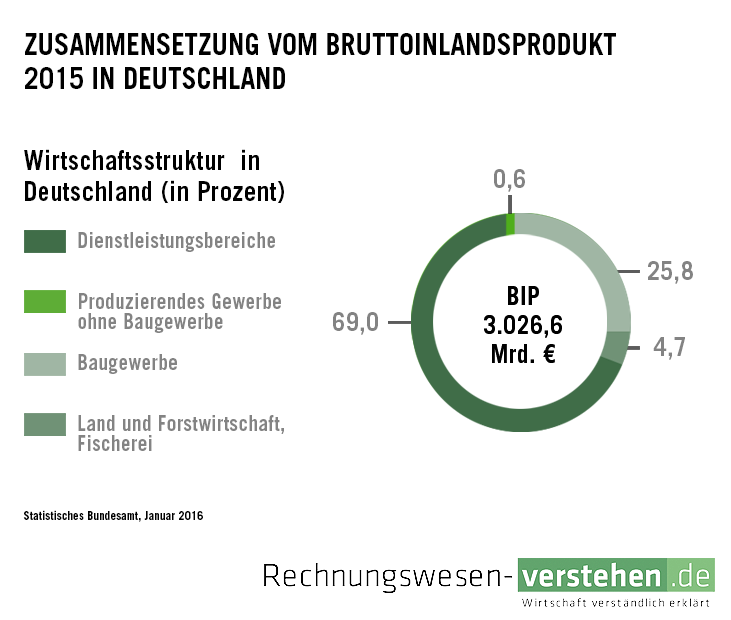 There exist in total three different methodsto determine the GDP by arithmetic. All roads lead to the same result. As part of the Production calculationthe economic performance from the production side is shown. To do this, the gross value added for the entire country is first determined. Calculation: total of all productions minus all preliminary work. The calculation of GDP then looks like this:

The usage calculation, on the other hand, takes a completely different approach, considering the side of the consumer. The use of all goods and services is determined. Calculation:

The last variant that remains is the distribution calculation, in which GDP is measured on the basis of incurred income. In Germany, however, this calculation is not carried out because there is insufficient information on corporate profits.