It is worth buying the Huawei Watch GT The Huawei Watch GT 2 Pro comes in a classy coat.

Huawei has refined the Watch GT 2 with a titanium case and sapphire crystal to make the Pro version. During sports, the smart watch precisely records the heart rate and the distance covered. However, it is only of limited use as an extension for the mobile phone, because it only receives notifications via Bluetooth. The lean operating system has two advantages. It is clear and energy-saving. The Huawei Watch GT 2 Pro has a running time of seven days, even with the time display activated. For those who like to train outside, the route-back function provides orientation for the way home.

Huawei has undergone plastic surgery on its popular GT 2 smartwatch. The result is its nobler twin, the Huawei Watch GT 2 Pro. In addition to innovations in design, the manufacturer has given fresh functions: the navigation function shows the way in unfamiliar terrain. COMPUTER BILD has already sent the smart watch to the test for the second time and reports good news: An update has now optimized the heart rate measurement.

The new materials - sapphire glass as protection for the display, a titanium frame around the case and a ceramic back - are not only appealing to lovers of fine watch designs. They also ensure improved scratch resistance: the robustness of the screen and back in particular came off well in the test (degree of hardness 7 out of 9), the titanium frame is a little sensitive (degree of hardness 3 out of 9). Otherwise, the Huawei Watch GT 2 Pro gives a familiar picture: its display with OLED technology remains just as large, rich in contrast, bright and sharp as its predecessor. The Huawei Watch GT 2 Pro is protected in the noble titanium case.

The touchscreen is generally easy to use, but in some menus, especially those with a list of apps or training programs, it reacts too imprecisely to inputs. Annoying: the two buttons on the right look nice and can even be turned - but unfortunately Huawei does not use this as a control element. The two knobs can be turned, but then nothing happens in the menu.

The manufacturer has set a bezel around the screen in the form of a discreet black border with marking in five-second steps. This increases the size of the entire watch: its case measures around 47 millimeters (mm) in width and a total of 54 mm in height (measured value including strap attachment) - and therefore fits well on stronger arms. Compared to the Huawei Watch GT 2e, the manufacturer has made an improvement: The bracelet is no longer at a rigid angle on the case, so that it hugs the wrist better. The manufacturer sells the smartwatch with a black plastic or gray leather strap - the latter variant probably better doing the noble character of the watch. With a case height of 11.4 millimeters (according to the manufacturer) or 14.2 millimeters including the pulse sensor (measured value), the case remains a little clunky, with a weight of 84 grams a bit heavy. 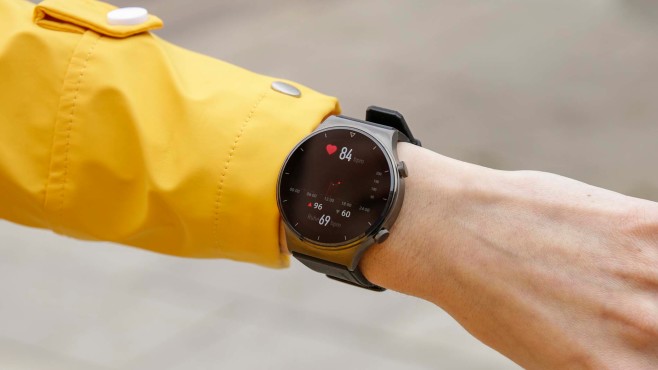 Heart rate measurement to the point

Like its predecessor, the watch measures the heart rate throughout the day, continuously or "intelligently", i.e. at slightly larger intervals. At the first COMPUTER BILD test in autumn 2020, the Pro version astonished with weaknesses in heart rate measurement, namely during intense exercise with a lot of arm movement. This problem was apparently in the software. A new test in February 2021 (under Version Lite OS 10.1.3.28) ran smoothly, the GT 2 Pro was spot on and followed the course of the heart rate in accordance with the reference device. From the heart data, the watch calculates the endurance value for the maximum oxygen uptake (VO2Max). The Watch GT 2 Pro also records the oxygen saturation in the blood (SpO2) - a feature that many current wearables offer. However: Even with Huawei, the values ​​are not medically accurate and therefore not very meaningful. 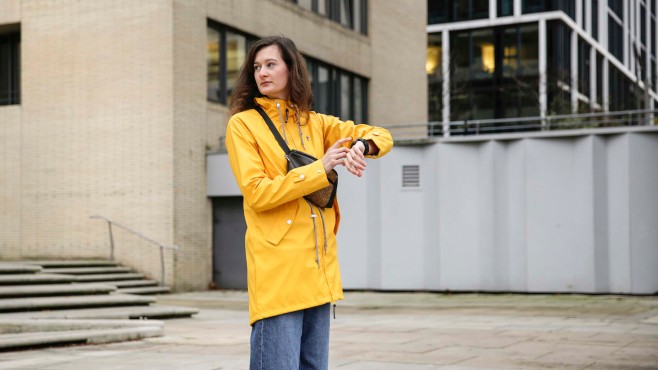 Where is this home going? The Huawei Watch GT 2 Pro shows the way back to the start of the walk.

As usual, the Huawei Watch records workouts with its sensors and records the route outside using the built-in GPS module. Up until now, it was only possible to analyze the distance covered in retrospect, but the manufacturer is now adding a feature known from sports watches that provides added value while on the move: If users start recording an outdoor training session, such as running, walking or cycling, they can swipe to find it a menu on the left that shows the route you have walked in the form of a line. Anyone who moves in unfamiliar terrain can then be guided home using the "return path" function. An arrow shows the direction and the line reveals which turns you have taken on the way there. The test showed: It works well! The watch gives hints when you are off course and the line is good for orientation. For workouts that take place outside, the watch records the route and visualizes it as a line.

Android users transfer music to the watch in the form of MP3 tracks. After all, streaming users control the music remotely on the paired Android phone using their watch. However, this does not work with iPhones. Huawei has equipped the watch with a total of 4 gigabytes of storage space. That should be enough for 500 songs. The watch reflects messages from the cell phone, but is not able to send a reply. Both Android and iPhone owners can make hands-free calls using a watch. That already worked in the test. It is a pity, however: the microphone and loudspeaker do not serve as a voice assistant, the loudspeaker does not even donate a sound to the alarm clock function, the watch only knows vibrations. So far there is no way to add apps to the system. However, the manufacturer is working on getting third-party apps onto smartwatches and also making a real app store available in the future.

Battery: Big battery, but not grown

Huawei uses a battery with a capacity of 455 milliampere hours (mAh) for the Watch GT 2 Pro. This means that the battery remains the same size as in the sister models Huawei Watch GT 2 and Huawei Watch GT 2e. The manufacturer promises a term of up to 14 days. However, this only applies to the waiver of power-intensive functions, such as a permanently activated screen. In the COMPUTER BILD test, the Watch GT 2 Pro achieved a running time of six days with permanent heart measurement and time display. 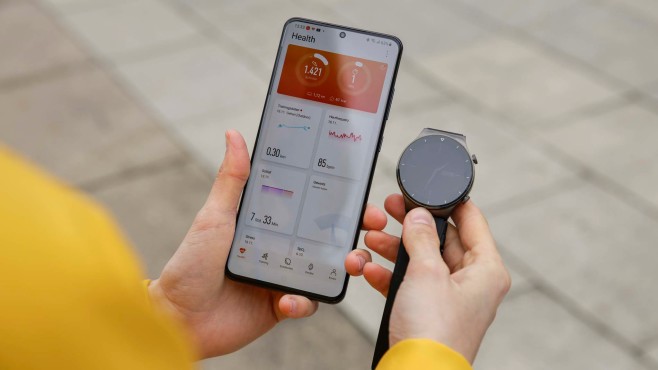 The Huawei Health app can only be installed on Android phones that are not from Huawei via a detour: The Huawei App Gallery is required.

The Huawei Watch GT 2 Pro runs like its predecessors with the slim in-house system LiteOS. This is clear and easy to use. However, the watch needs a compatible smartphone to pair and use - and this is where the catch arises: The Huawei Health app can be installed on Android devices (version 5.0 or higher) via the Google Play Store, but de facto no longer works . The saving update is only available via the Huawei App Gallery. It remains to be seen whether this will ever be easier again - as long as the Trump embargo against Huawei applies, no improvement appears in sight. How to get the Huawei Health app onto your Android smartphone is explained by COMPUTER BILD in a separate article. iPhone users (from iOS 9.0) can use the Huawei Health app with restrictions as usual. Music functions do not work with a paired iPhone.

The elegant Huawei Watch GT 2 Pro stands out from its predecessors primarily through its practical return navigation function. There is competition from within its own ranks: With the Honor Watch GT Pro, the Huawei subsidiary Honor presented a technically almost identical smartwatch, but with 790 mAh, it has a significantly more ample battery - and so even with days of hiking with power-guzzling GPS recording so quickly to the charger. Instead, the Huawei Watch GT 2 Pro comes in a more elegant design with a scratch-resistant titanium alloy and a more comfortable bracelet. For detention, the Huawei Watch GT 2 Pro has to compete in terms of smart functions: Other smartwatches with Samsung's Tizen system, Google's Wear OS, Fitbit's in-house OS or Apple's watchOS can be expanded with apps - something that the young Huawei system has not yet done implemented. The manufacturer also lags behind when it comes to messaging. So far, the watch has only displayed messages without offering a response function. Speaking of communication: there is a lack of mobile communications and a voice assistant that would give the watch independence and new functions. 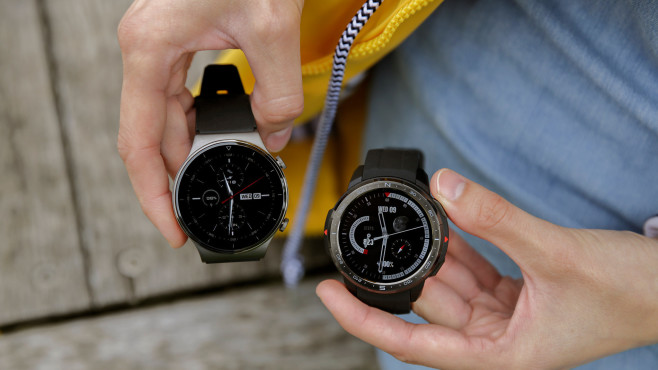 The Honor Watch GT Pro (right) appeared almost at the same time as the Huawei Watch GT 2 Pro - with an even larger battery.

* The cheapest price may be higher in the meantime.