How do the Vietnamese see China now?

Gold star on a red background. Smart cadets in white uniforms. Plus sunsets by the sea and songs from home. On the Vietnamese state television, the patriotic sentiment is constantly rising to new heights. The government in Hanoi is focusing on emotions - and the message is clear: Truong Sa and Hoang Sa, as the two island groups in the South China Sea claimed by China and Vietnam are called in Vietnamese, belong to Vietnam. Point.

China sees it differently: After the first Chinese oil rig was anchored in the disputed waters at the beginning of May, the next one will follow in mid-June. The Asia experts agree that China is operating a new form of expansive foreign policy in the South China Sea, which could soon be used in other regions as well. And so China is changing the status quo step by step - to the growing concern of Southeast Asia, but also Japan and the USA. And the comparatively small neighboring countries find it difficult to deal with the Asian superpower, despite the backing of the USA, as in the case of the Philippines.

The anger over the unilateral advance of the big neighbor erupted in violent protests in various provinces of Vietnam in mid-May. Four people were killed. The Vietnamese government took decisive action against the violent demonstrators. The situation is now under control again. 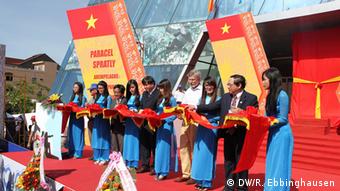 Anyone who speaks to the Vietnamese about the territorial conflict quickly comes to the conflicting history of both countries. There is talk of Ngo Quyen, who won Vietnam's independence from China in 938. Or about Le Loi and the Trung siblings, who drove the Chinese out. It sounds as if they are personalities of the present.

"The islands have belonged to Vietnam for 1000 years. What China is doing is illegal," says an elderly gentleman, who ends the hot day at Hoan Kiem Lake in the heart of the capital Hanoi. "The fight against China," writes senior geopolitical analyst for American think tank Stratfor Robert D. Kaplan in his most recent book on the conflict in the South China Sea, "is the thematic core of Vietnamese history."

So the visitor encounters the island dispute everywhere in the country. In the entrance area of ​​the historical museum of the capital Hanoi, three cards should prove the centuries of possession of the disputed archipelago. Tourists are also informed about this in Vietnamese and English at the airports. In the central Vietnamese port city of Danang, an exhibition was opened these days as part of an international conference, which has compiled documents and maps from several centuries as evidence, so to speak. Even on small islands in the South China Sea itself, there are traveling exhibitions that are supposed to prove the historical rights of Vietnam.

Fight? Or accept the oppression?

"The Vietnamese hate what the Chinese are doing off the coast of Vietnam," continues the older man at the lake. "But they have to calm down and find a peaceful solution." Another man adds: "I can't imagine that there is war in the near future. China and Vietnam have close ties on many levels. "And in a suburb of Hanoi, a former soldier told Deutsche Welle:" Nobody wants war. " 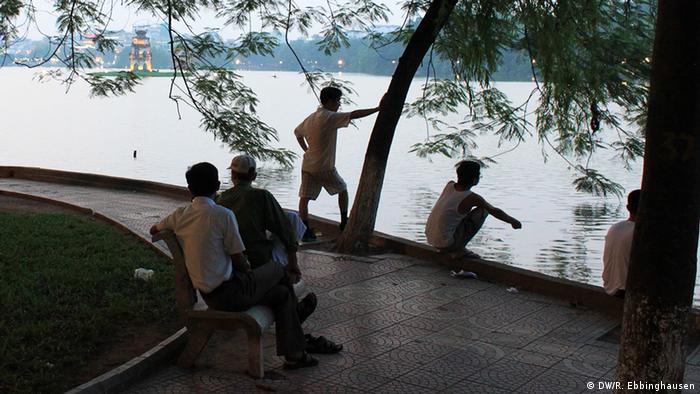 Relaxation at the lake: The Vietnamese hope for a peaceful solution

But nobody really knows how to solve the conflict in concrete terms. The men at Hoan Kiem Lake agree that Vietnam needs the help of the international community because China is a giant compared to Vietnam. "Otherwise we have no choice but to accept Chinese oppression."

Many approaches, no solution

Even at the conference in Danang, which lasted several days, the experts from ten countries struggled to find a concrete approach. Jerome Cohen of the New York School of Law says, "China will stay. It is unacceptable to do nothing. And it is unacceptable to risk war." China must be moved within the framework of international law. How this can work, however, remains unclear - because China has so far refused to recognize that there is even a territorial dispute. 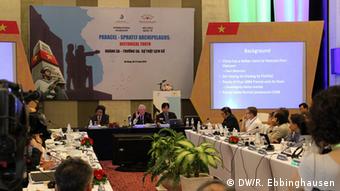 A room full of clever minds: But the analysts at the conference in Danang did not find a solution either

Leszek Buszynski, professor of foreign policy at the International University in Japan, believes it is crucial that the Communist Party of Vietnam emancipates itself from its Chinese counterpart. And Gregory Poling from the Center for Strategic and International Studies in Washington advocates a regional approach: the Association of Southeast Asian Nations (ASEAN) in particular should continue to work on a code of conduct.

Carl Thayer from the Australian university no longer believes in the success of such rules, because China is already not adhering to the declaration of intent adopted by ASEAN and China in 2002 to draw up a code of conduct. He recommends going to the United Nations Security Council. In turn, some experts consider this to be unpromising, as China has a veto in the Security Council.

The mixture of strong national sentiment and centuries-old resentment, which is widespread throughout the region, makes a political solution so difficult, says Gerhard Will from the Science and Politics Foundation in Berlin. The governments on all sides promise so much to their respective populations that there is hardly any room for negotiations. Instead, there is room for emotion, propaganda, and preppy cadets.