Flamingos are birds whose special feature the pink plumage is as well as the behavior on one leg to stand and to sleep. There are a total of six species: Greater Flamingo, Cuban Flamingo, Chilean Flamingo, Lesser Flamingo, Andean Flamingo and James Flamingo. The birds were already depicted as hieroglyphs in ancient Egypt and in Stone Age cave drawings.

Why are flamingos pink?

Flamingos get their striking pink color from their food. The algae and crustaceans that are on the menu of the flamingos contain certain color pigments that turn them pink. While all flamingos have this typical light pink to bright pink color, the Andean flamingos fry an extra sausage: They are the only flamingo species with yellow legs.

Why do flamingos stand on one leg?

There are dozens of theories dealing with this puzzle. The most likely is that the flamingos will pull one leg in order to lose less body heat and save energy. As soon as the leg is under the feathers and no longer in the cold water, the heart does not have to pump as much blood through the veins. 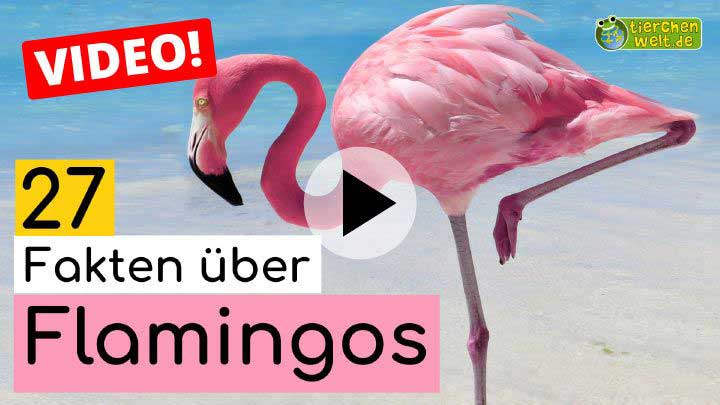 Why do flamingos have so long legs?

With their long legs, flamingos can wade deeper into the water than most other birds and thus find more food.

How do flamingos eat?

Flamingos take in water and mud with their beak and pump the whole thing out again through the beak sides. Small crustaceans and algae do not slide out. They get stuck in the lamellae of the so-called "creaking beak".

Where do flamingos live?

The natural habitat of flamingos are alkaline or salty lakes. How alkaline (= basic) or acidic a liquid is can be seen in the pH value. 0 is strongly acidic and 14 is strongly alkaline. Flamingos tend to prefer alkaline water. Usually this is an environment in which few other animals live - except for those that, like the flamingos, get along well in it: small organisms like crustaceans.

Flamingos usually live in large colonies that can consist of over 10,000 birds. Colonies with over 1 million Lesser Flamingos have even been observed at Lake Natron in Tanzania (East Africa).

Flamingos make lots of fun moves if you take your time and watch them. They even have official names that zoologist Phil Kahl wrote down:

Yes! However, you first have to make a run-up to achieve the necessary speed. When they fly through the air, they usually flap their wings quickly and non-stop. They also like to be in company in the air and fly in large groups.

The flamingo's nest is not particularly inviting because it is little more than a mud trough. It is around 30 cm high so that the eggs are not washed away by the tide. After a flamingo chick hatches from its egg, it stays in its nest for between 5 and 12 days and is fed with a special milk that comes from the upper digestive tract (bon appetite!). This is how flamingo dad AND mom can feed. Even strange flamingos can help out.

Where do the flamingo species live?

In the past they were counted among the wading or wading birds, then the geese, then the plover-like and today biologists are of the opinion again that they belong to the wading birds. Or to the grebes. It's complicated ;)