Can a mechanical engineer work from home?

When factories become smart and robots also take on more complex tasks, what does the everyday work of engineers look like? We asked the major industry associations. 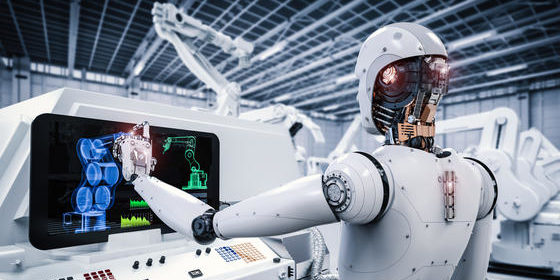 Robots will not work alone in the factory, they will also need engineers in 2030 to control, monitor and guide them.

Whether cars are to be connected to the infrastructure, production machines are to be networked or logistics routes are to be monitored – In the course of digitization, engineers are being charged with completely new tasks. In the media this is discussed in parts as if the smart factory were already a reality, but the working world of many engineers (still) looks different.

But how should you prepare for the smart factory and the Internet of Things in your professional life, if it doesn't seem clear how they will affect them? We asked the 4 major industry associations of engineers and engineering employers how engineers will work in 2030. And this is how you imagine the future:

More interdisciplinarity - the ivory tower of engineering is breaking up

The individual disciplines will open up and partially merge with one another. What that might look like is outlined Lars Funk, Head of Occupation and Society at the VDI Association of German Engineers: “The digital transformation is well advanced in 2030. Germany has to fight harder and harder for its international top position as a technology location, but has expanded its leadership role in research and development in engineering. Interdisciplinary teams of experts, which now also include data scientists, cloud service specialists and production IT specialists, develop platform-based business models. "

Even more than today, engineers will have the task of coordinating interdisciplinary work, the labor market experts of the associations agree. This not only requires a lot of specialist knowledge in your own and neighboring areas of responsibility, it also requires the ability to communicate with other disciplines. This is how the experts of the associations imagine it in detail:

Fabian Seus, Head of the Competence Center Labor Market at VDMA Verband Deutscher Maschinen- und Anlagenbau: “Interdisciplinarity and interface skills are becoming more important: The classic separation between mechanical engineering, electrical engineering and IT is (increasingly) disappearing. That does not mean that every mechanical engineer, for example, has to be able to program, but he should understand enough about programming to be able to explain his requirements to a computer scientist. A common language in interdisciplinary teams and communication skills are becoming more important. "

Dr. Michael Schanz, labor market expert at the VDE Association of electrical engineering, electronics and information technology: “The separation of development, construction and production on the one hand and information and communication technology on the other will increasingly dissolve. The result: the engineers of tomorrow will have to have far greater social and communicative skills than is necessary today. You must have the ability to manage the collaboration between different disciplines such as electrical engineering, mechanical engineering and computer science. "

André John, advisor for education policy at the ZVEI Zentralverband Elektrotechnik- und Elektronikindustrie: “Engineers in particular must be able to manage the growing interdisciplinarity that smart factories require: Technologies, production processes, data processing, data security and business processes must be understood by the individual engineer and embedded in the overall process in a solution-oriented manner.

In production today, engineers have the upper hand. In the year 2030, however, automation will have advanced significantly, robots will have found their permanent place in the factory and will be able to communicate with each other. Where do engineers find their place in this smart factory?

For Seus from the VDMA, engineers in the production of the future will become process managers. The deserted factory is an illusion, "but people will have to intervene in production less often". In return, however, actively by eliminating malfunctions, carrying out conversions and making adjustments. Approval comes from Dr. Schanz from the VDE, who will also assign the engineers more "monitoring and troubleshooting tasks" in 2030. The requirements will therefore shift to creative and value-adding activities such as problem solving. “Standard and routine tasks, on the other hand, are increasingly being carried out by software,” says Schanz.

Now we have an idea of ​​what the working environment could look like in 2030 and what tasks engineers have to do. But what is the best way to prepare for this new world of work and what is already happening in training and further education for engineers?

John from the ZVEI already has specific ideas for the training: Engineers must be trained in such a way that they “develop competencies in both computer science and systems engineering. Only in this way will they be able to implement complex technical systems in large projects in the future. ”To do this, the universities would have to combine specialist content from the electrical engineering and information technology, mechatronics, IT and mechanical engineering courses.

Anyone who is already working and feeling the changes in their day-to-day work will have to continue their education in order to lose touch. Schanz from the VDE recommends above all to acquire a solid understanding of IT. Companies would also have to impart methods and skills that enable their employees to acquire the necessary knowledge "on the job".

The boundaries between disciplines are becoming blurred, the division of labor is increasing, and rigid structures are being dissolved. Especially in project management, says Funk from the VDI. Agile methods take their place and overturn a piece of the engineer's self-image: “The urge for time-consuming product perfection at the beginning of a market launch has given way to a minimum viable product mentality in 2030,” says Funk. Because it focuses more on the wishes of the customer and the user. As a result, companies would no longer view periodic product developments as a dangerous experiment, as is often the case today.

What are the characteristics of engineers in 2030?

What are the personal characteristics of a person who will work as an engineer or skilled worker in 2030? "In addition to technical knowledge and methodological skills, interdisciplinary qualifications are increasing," says Seus from the VDMA. Teamwork and communication skills, project and process management, and sometimes intercultural skills will be in demand in 2030. John from the ZVEI is convinced that above all he should be curious and thirsty for knowledge. "Anyone who is motivated to learn new things over and over again can expect a varied professional life," says Rieger with conviction.

So there they are, the future prospects for engineers in 2030. And because that is not that long, preparations are being made today, courses are designed and advanced training courses are being prepared so that engineers can prepare for their future tasks. Universities are facing a radical change, because they not only have to digitize their teaching, but also have to adapt the teaching content to the new requirements. A process that got off to a bumpy start, as this report shows.

The associations at a glance

VDE - The Association of Electrical Engineering, Electronics and Information Technology (VDE) represents 1,300 companies and 34,700 people by its own account. It offers a platform for science, standardization and product testing and is committed to consumer protection, research and the promotion of young talent. The association was founded in 1893, the year in which the entire German Empire was given a uniform time to which the railways could orient themselves.

VDI - The Association of German Engineers (VDI) describes itself as the spokesman for engineers and technology and has around 155,000 personal members. The association is a platform for exchange for its members, represents their interests in politics and develops technical guidelines with them. The VDI was founded long before there was a unified German Empire, in the middle of the 19th century, in 1856. In the same year, the Peace of Paris ended the Crimean War in favor of the Ottoman Empire and the Krupp company in Essen set up a company health insurance fund for its workers .

VDMA - The Association of German Mechanical and Plant Engineering (VDMA) According to its own information, it represents over 3,200 primarily medium-sized companies in the capital goods industry. The German mechanical engineering sector is the largest branch of industry in Germany and employs around 1 million people. 77% of the goods produced are exported. In the past year, mechanical engineering turned over 220 billion euros. The VDMA was founded in 1892. A year in which the escalator was patented in the USA and the last cholera epidemic in Germany raged in Hamburg.

ZVEI - The German Electrical and Electronic Manufacturers' Association (ZVEI) represents 1,600 companies in the electrical industry. The industry employs around 849,000 people in Germany and achieved sales of 179 billion euros in 2016. The ZVEI was only founded in the 20th century, at the end of the First World War in 1918 under the then head of state Kaiser Wilhelm II.

Engineering jobs with a future