After fatal attack in Georgia: With hatred and guns

Asian American women are fearful after the murder of eight people. You have had too many bad experiences in the past year. 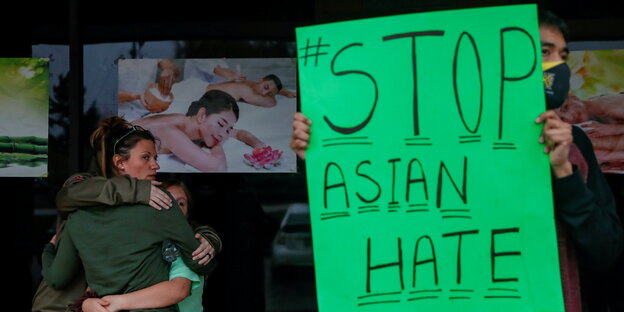 Grief and anger at one of the crime scenes the day after the fatal shooting Photo: Shannon Stapleton

NEW YORKtaz | "He's had a bad day," said Frank Reynolds of the Atlanta Sheriff's Office the morning after the massacre. He means the 21-year-old who confessed to murdering eight people on Tuesday afternoon. Seven of the victims were women. Six of them were of Asian descent. All were in one of three “massage parlors” on the outskirts. The suspect is now charged with eight murders.

The prosecutors do not consider a racist background or hate crimes to be proven. Just like the alleged perpetrator, whom they arrested the previous evening without the slightest use of force, their skin color is white. At the press conference, they talked about his "problems", his "sex addiction" and the fact that he saw the women in the salons as "temptations". Empathy with victims looks different.

Members of the Asian-American population in the US have understood the Atlanta massacre differently from the first moment. So far it is unclear whether racism was one of the motives. But Asian Americans have experienced so much hostility and attacks in the past twelve months that they have become cautious and fearful.

The Asian-American group “AAPI against Hate” recorded 3,795 anti-Asian incidents in the past year. That is a huge increase over the previous year. The incidents range from being addressed as “Covid-19” to the accusation “You brought the pandemic here” to the request “Go back to China”, whereby the young people were mostly born in the USA. Spitting, jostling and even fatal violence were recorded. By far the most common victims of anti-Asian violence are women.

Misogynists with a legal weapon

The mayor of Atlanta, a black Democrat, is the only speaker at the press conference the morning after the crime to make the connection. "So far we do not know the motives of the perpetrator," says Keisha Lance Bottoms, "but the majority of the victims are Asian".

She has been in contact with the White House since the massacre in her city. Kamala Harris is among the many white, black, and Asian celebrities who speak out the day after the massacre. The vice president, whose mother was from India, speaks about the "increasing violence against Asian Americans" and says: "None of us should be silent in the face of hatred".

Little is known about the alleged perpetrator. According to the online medium Daily Beast he described himself with these words: "Pizza, guns, drums, music, family, God". He is said to have legally acquired his murder weapon on the day of the crime.

Like numerous other mass murderers, he appears to have a massive problem with women. His social media profiles are no longer publicly available the day after the massacre. The evangelical congregation "Crabapple First Baptist Church" in Atlanta, of which he belongs, also went offline after the massacre.

The prosecutors suspect that the 21-year-old was himself a customer of sex workers in the massage parlors in which he murdered. They also suspect that when he was arrested, he was on his way to Florida, where he had planned further massacres. The Republican Governor of Georgia, Brian Kemp, praised the police for preventing worse things from happening.

Fear on the way home at night

Of the six Asian women murdered, four are said to originally come from Korea. On Wednesday, numerous speakers from the Asian minority in the United States spoke out about the rise in anti-racism. Many blame ex-President Donald Trump, who has been open since spring last year - and also on Tuesday of this week Fox News - talked about the "China virus" almost every day.

So far, the hostility has taken place on the street, in shops and in schools. Many of those affected fear that as the economy becomes more open, it will also spread to the factories.

Because of the hostilities, many Asian Americans no longer take to the streets alone or after dark. In the Chinatown of Oakland, California, business people pay guardians for their customers. Many of the younger generation of Asian Americans took part in the anti-racist demonstrations of Black Lives Matter last summer.