How did you change your job?

Caught cold: In job interviews she drives Question "Why have you changed jobs so often?" many applicants Sweat of fear On the forhead. Especially if the resume really noticeable many changes contains.

Assistance: We'll tell you how to deal with a good strategy and authentic Arguments this difficult question answer credibly. 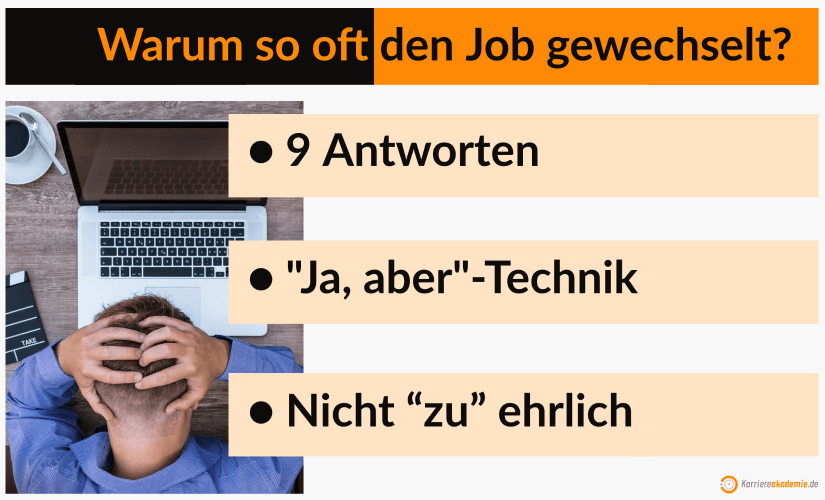 Job for life: there are fewer and fewer

The change is constant: For one thing, it is nowadays much more common to change employers more often than before. The causes for this are manifold.

Job changes after a shorter period of time take place, for example, because

DO NOT explain SO many job changes in the interview

For tactical reasons, you should certainly not formulate evasive, superficial or too direct answers.

These somewhat abbreviated, but still often heard, statements are far too honest.

Talking about the new job: Please bear in mind that every new employer will be convinced of your strengths, experience and your ability to work hard and for as long as possible in job interviews.

So you need a mix of honesty and tactics in answering the question "You have changed so often, are you a job hopper?"

With a little communication skills, you will be able to answer the tricky question about frequent job changes better.

By the way, the word "but" can trigger a defensive reaction in some HR employees.

Instead of "but", words like "however", "however", "on the other hand" and more are recommended. Communication professionals are talking about the modified "yes, but" technique.

Answers: Why did you change jobs so often?

How the new employer BENEFITS from your changes

In our application coaching, we regularly find that job hopping does not only have disadvantages.

Considered retrospectively: Looking back, you will also see that, for example, you have learned a great deal about the products or services of the respective employer in a very short time.

Conversational Psychology: And with this "advantage" communication, you take the hurdle of having to justify your change.

You do not need to respond evasively or monosyllabically when asked, but can clearly agree that the change took place in a shorter time than you planned, but that you also benefited from it in retrospect, because ...