Is Mexico really in North America?

Despite Corona: tourism boom in Mexico

The planes take off and land at Cancun International Airport every five minutes - and have been doing so since December. It is high season in the Mexican seaside resort on the Caribbean coast. Lufthansa has also included the Mexican tourist stronghold in its program since October - despite COVID-19. Bathers from Europe and North America cavort on the beach, queues form in front of the Mayan pyramids, hoteliers and restaurateurs breathe a sigh of relief. For many vacationers, the beach is apparently more tempting than the worrying press reports of full intensive care units and rising numbers of infections in Mexico, where 174,000 people have died of COVID-19 so far. According to the latest, preliminary statistics from the World Tourism Organization (UNWTO), Mexico was the most visited destination in Latin America in 2020 and moved up to third place in the world, after Italy and France.

The reasons for this are diverse. Mexico never closed its borders and is still one of the few countries in the world that does not require a negative PCR test when entering the country. Because President Andrés Manuel López Obrador is one of the heads of state who reject lockdowns and give the economy top priority. Another reason are the home visits by migrants, which drove up the number of visitors at Christmas time. The statistics are of course not very meaningful, as Michael Hallé points out to DW. "They also included the pre-pandemic months from January to March, which are high season in Mexico." The Canadian is co-founder of the consulting company 10Gates and has been advising authorities and entrepreneurs in the industry in Mexico for 30 years. 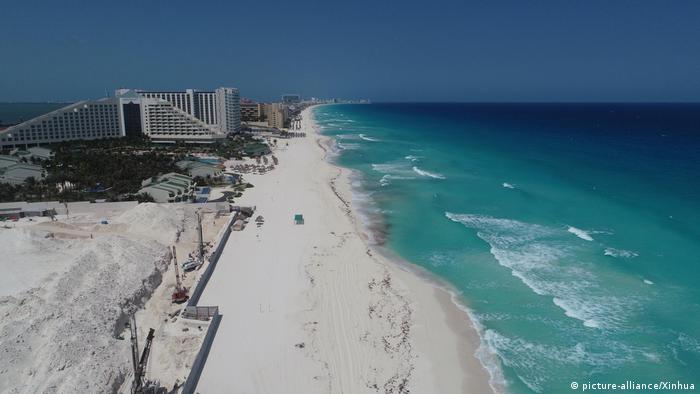 In April, at the height of the first wave of pandemics, Cancun's dream beaches were still empty.

No subsidies, but regional hygiene concepts

Despite the third place in the UNWTO statistics, the slump in Mexico was also dramatic: According to the statistics institute Inegi, there were almost 48 percent fewer visitors and 55 percent less foreign exchange income in 2020 compared to the previous year. It is remarkable that the sector still survives. Because unlike in Germany, there were no subsidies for airlines and tour operators. On the contrary: shortly before the pandemic, the government dissolved the national tourism marketing agency for reasons of economy.

But regional authorities and tourism associations have stepped into the breach, said Hallé. "As early as the summer of 2020, the hotels on the Caribbean coast had certified hygiene concepts that we don't even have in Canada. That created trust among travelers." In the state of Quintana Roo, in which Cancún is located, the governor made mask compulsory. In addition, Cancun is only three to four hours away by flight for Canadians and Americans - the risk of becoming infected on a flight is therefore lower. According to the statistics, the majority of foreign holidaymakers also came from these two countries. Among them is the well-known US Senator Ted Cruz: He also flew to the seaside resort of Cancún - and is heavily criticized for it.

Many doctors consider the opening to be risky and blame tourism for the increase in infections in holiday destinations. Official statistics show rising numbers there in February, but the infections were still well behind the hotspots around Mexico City and central Mexico.

Another lifeline was national tourism - a very lucrative market in a country with 126 million inhabitants. It cushioned the slump in international business a little. Meinolf Koessmeier, for example, made this experience. His agency Mexico Adventures organizes motorcycle tours. Koessmeier, who is based in Cuernavaca, has so far specialized in showing Mexicans the beauties of Europe on two wheels, but in 2020 he offered local tours. So he survived, but his annual turnover melted down. He hopes business will return to normal in 2022. "There is great interest in nature holidays," he observed. "Worldwide motorcycle manufacturers had record sales in 2020 and buyers are just waiting for an opportunity to enjoy their new acquisition to the fullest." Hallé confirms the need to catch up: "In our most recent survey, the Americans were again optimistic for the first time and hoped to travel again in the next 6 months thanks to the vaccinations."

Despite everything, the sector will not recover overnight. There was only a setback after Canada and the US imposed stricter travel requirements due to mutations in the virus; Returnees are now required to carry out negative PCR tests, and stricter quarantine regulations are now in place. Mexico reacted immediately: The major airports are now offering PCR test modules, and some hotels are also providing the service. According to Hallé, the pandemic also offers Mexico the opportunity for more sustainable tourism. He considers mass handling and city tourism to be over in the medium term. Countries like Mexico, on the other hand, which score with a lot of space and natural beauty, could benefit from it.