Bundeswehr and right-wing extremists: Boy Scout ideals are not enough

The German armed forces do not suffer from a lack of military virtues in their ranks, but from their excess. 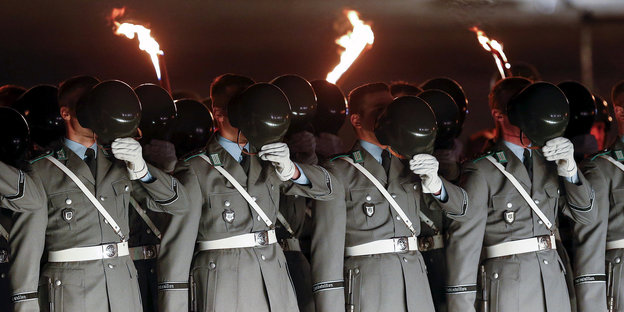 The case of Franco A. and Associates is not Ursula von der Leyen's “huge embarrassment”, as SPD parliamentary group leader Thomas Oppermann claims in campaign mode. It is the foreseeable failure of a system in which, among others, five of Oppermann's party colleagues were involved as defense ministers. A system whose chief inspector General Volker Wieker, when asked about military virtues, can be quoted as follows: "You cannot be a good soldier without a basic patriotic attitude."

When asked whether he had a patriotic attitude, Franco A. could certainly answer in the affirmative. He would also pass the test of whether he follows the soldier virtues of "comradeship, determination, steadfastness, bravery and perseverance". But a democracy has to expect more from its armed forces than a few boy scout ideals.

Humanity, solidarity and critical judgment could make a good soldier, regardless of whether he or she goes into the cot every evening with the national anthem on his lips. However, the Bundeswehr's recruiting policy alone runs counter to such an interest. Anyone who tries to recruit minors in schools does not want to find “citizens in uniform” with a solid character, but rather, on the contrary, malleable material that can be used as required without contradiction.

This closes the circle: Those who would be necessary as a corrective in the Bundeswehr will hardly be fooled by the glossy brochures in which it is pretended that the soldier is a completely normal job description - exciting, challenging, with one maybe something stricter dress code than usual.

Not a criminal organization

Uniforms and weapons, plus a depoliticized cultivation of tradition, which officially pays homage to July 20, 1944 and unofficially keeps both eyes so tight that it actually takes police raids to discover Wehrmacht devotional items in barracks. Barracks, of which not a few only dropped the names of Wehrmacht generals and other war criminals within the last two decades - others still do not today.

Of course, the Bundeswehr is not a criminal organization made up of right-wing extremists. But it should not surprise anyone that suspected right-wing terrorists may feel more comfortable there than liberal or even left-wing democrats.

The Bundeswehr probably needs a new traditional decree and a much deeper anchoring in society. In addition, a clear, politically defined mandate. Because she's been missing that since the immediate national defense moved into the background. A task that withstands broad social discussion and critical scrutiny. An assignment that cannot easily be changed after a political opportunity that is difficult to predict. This is the only way to make the armed forces attractive to those who do not feel simply addressed by the tone of command, the tattoo and the Iron Cross.

If such a mandate cannot be defined and if the political leadership fails to develop a personnel policy that strengthens democratic values ​​and anti-authoritarianism in the armed forces, all that remains is to repeat the old creed of the peace movement: Abolish the Bundeswehr.

The author did his 12-month military service in Schleswig-Holstein in the early 1990s. He was stationed in the General-Thomsen-Kaserne, which is still called today. Hermann von der Lieth-Thomsen prepared the establishment of the German Air Force in the Weimar Republic in breach of the Versailles Treaty and was head of the "War Studies Department of the Air Force" from 1935 until his death in 1942.