Hip replacement is a major operation

Hip surgery for the implantation of a hip endoprosthesis is a frequently performed procedure. In Germany alone, around 200,000 hip operations of this type are performed every year. The goal of hip replacement surgery is to eliminate pain and restore mobility to the hip joint. The implantation of a hip endoprosthesis usually takes between one and two hours and can be carried out under general anesthesia as well as with what is known as spinal canal anesthesia. Of course, in addition to the implantation of an artificial hip, there are also other hip operations, which you will find described below.

Preparations and preliminary examinations before the hip operation

Before the Hip surgery Some preparatory examinations - especially imaging examinations such as the X-ray examination - as well as an explanation and consultation are necessary. The aim of this is to determine whether the patient actually needs an artificial hip joint and, if so, which type of hip prosthesis should be used and which type of anchoring is most suitable. 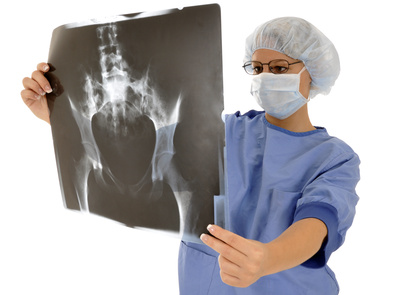 To find out how to proceed and how the Hip surgery In order to plan, a computer-aided planning sketch is therefore made on the basis of the x-ray images, in which the size and position of the individual prosthesis components are individually tailored to the patient. Possible complications during hip surgery can thus be kept to a minimum or avoided.

The Hip replacement success and the further healing process depend in large part on the Rehabilitation ability of the patient himself. In order to improve this, the patient should improve his general condition in advance of the operation, for example by avoiding nicotine and reducing his weight. On the other hand, he should prepare himself specifically for a life with an artificial hip joint in advance. The latter happens in particular through specific physiotherapy exercises that support muscle building in the affected hip joint.

Another preparatory measure before the hip operation can be autologous blood donation. Any increased blood loss during hip surgery, which cannot always be ruled out despite tissue-conserving surgical methods, can be compensated for.

Patients who regularly take anticoagulant medication such as ASA or Marcumar should discontinue them in good time before the procedure in consultation with the treating doctor in order to avoid an increased risk of bleeding during the operation.

The hip surgery for the implantation of a hip endoprosthesis

With the conventional surgical method, in which the hip joint is completely surgically opened, and the minimally invasive surgical technique, in which the hip prosthesis is implanted through a natural muscle gap, which is gentle on the tissue, there are two different methods of implanting a hip endoprosthesis to choose from.

The hip operation can be performed under general anesthesia as well as with spinal anesthesia. Regardless of the anchoring of the hip endoprosthesis, the hip joint is first surgically opened and diseased bone material, the worn joint surfaces, is removed. The ver
permanent bone is prepared for the implant. The cartilage surfaces of the pelvic socket are machined with special burs to prepare the implant bed. The hip shaft is opened and prepared with special rasps depending on the endoprosthesis shaft.

Depending on the method used, the endoprosthesis is now cemented, screwed in or pressed in. At the end of the hip operation, the hip joint is tested for functionality and mobility, the wound is closed and a compression bandage is applied. The entire hip replacement usually takes 1 to 2 hours.

The minimally invasive surgical technique is a tissue-sparing type of implantation of an artificial hip joint. The hip endoprosthesis is created through a natural muscle gap while protecting the soft tissues, i. H. Muscles, tendons and tissues.

One advantage of the minimally invasive surgical technique is the faster rehabilitation of the patient, smaller skin incisions and consequently a better cosmetic result, less blood loss, less pain and less painkillers, faster mobility and mobilization and thus faster reintegration into everyday life. The minimally invasive technique can basically be used for every age group, but it is not suitable for every basic hip joint disease and has its limits.

A distinction is made between special and general complications that can occur during and after hip surgery for the implantation of the artificial hip joint.

Special complications of a hip replacement

The special complications of hip surgery for the implantation of a hip endoprosthesis only affect the artificial hip joint:

Hip surgery without the use of a prosthesis

The hip is known to be a very heavily stressed joint in the human body. Operations to use an artificial joint have become standard in today's medicine. But it doesn't always have to be the joint replacement that calls for an operation. Because there are of course other complaints and injuries that make surgery on the hip necessary. Young people or competitive athletes can also be affected by this.

The term "impingement syndrome" is known to many people primarily from the shoulder area. But there are also symptoms in the hips. For example, if the femur and acetabulum are improperly fitted, patients can develop such hip impingement over time. In technical jargon, this is also called "femoro-acetabular impingement". Even small deviations in the fit of the acetabulum and thighbones can encourage this condition to develop. The symptoms cannot always be clearly assigned to hip impingement. They manifest themselves in the form of pain - especially when sitting for long periods - and restricted mobility. It is not uncommon for the pain to begin in the groin area. While the hip impingement is still in its early stages Treated conservatively later, only a surgical procedure is helpful. The intervention does not necessarily have to take place openly. The doctor can also do one Arthroscopy carry out. The misalignment of the joint can be treated with either method. Also one Osteotomy (Cutting bone), which realigns the pelvic bone, can be used as a surgical measure.

Hip dysplasia is a malformation in which the hip socket is not properly formed in infancy. As a result, this can lead to the femoral head slipping out of the socket more frequently. A so-called "dislocation" occurs, a dislocation. If there is an increased tendency for this due to the malformation, then one speaks of hip dysplasia.

This clinical picture does not always have to be treated surgically. For example, reducing the hip joint and then immobilizing it in a cast can help. This method is indicated for type three and four hip dysplasias. If, however, a surgical treatment does have to come about, the femoral head can be fixed in the socket with a wire. Here too, immobilization is then carried out with a plaster of paris and splint. Whether and when an operation is necessary is up to the doctor to decide. Find out more about hip dysplasia here.

Cartilage damage in the hip

Cartilage damage can occur not only in the knee joint area, but also in the hip. In addition to older people, athletes who put a lot of stress on their hips in their sport can develop cartilage damage.

In recent years ice hockey goalkeepers have had to struggle with hip problems due to their specific movements, which are often due to damage to the cartilage or the labrum - the lip of the pan. If these need to be treated surgically, this will take place Treatment usually arthroscopically instead of. This avoids larger cuts. This also significantly shortens the rehab time, which is particularly popular in top-class sport. During the operation, for example, free joint bodies can be removed or cartilage-building therapies can be used.

After hip surgery: prognosis and rehab

When asked about prognosis and rehab time after hip surgery, it is not possible to give an exact period of time. Much depends, of course, on the extent of the damage. For example, if it is a hip impingement, healing can take months. Although the hip joint can be easily and carefully loaded again after a few days, it takes about three months for it to be fully restored and resilient. There are also interventions that require far less patience on the part of the convalescent. You can find more information about hip rehab here.

Caution should be exercised in the follow-up treatment of hip dysplasia surgery in children. So that no developmental deficits occur due to the very long immobilization with plaster of paris and splint (about three months), attention should be paid to accompanying therapy. The Vojta method in particular has proven its worth here. It is a physiotherapeutic treatment that can be used for many disorders of the central nervous system or the musculoskeletal system - also in the follow-up treatment of hip dysplasia.