Third gender in language What's the best way to talk to non-binaries?

Even the Bundestag has now recognized that there are more than women and men. But how do we address non-binary people and what should one absolutely avoid? We asked and answered the most important questions. 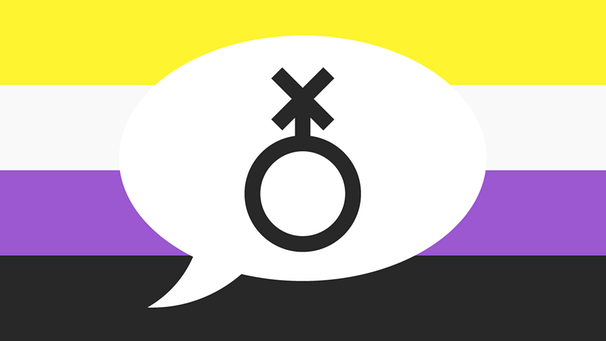 The German language is full of gender assignments: Regardless of whether the address is "Herr" and "Frau" or pronouns such as "she" and "he". When we talk about "students" across the board, we usually also mean female students - but it should actually mean "female students". So while our language far too often ignores women, non-binary people are almost completely ignored.

What does non-binary mean?

Non-binary or non-binary people do not identify as men or women. On December 13, 2018, the Bundestag decided on the third gender option "diverse", thereby legally enabling at least intersex people to position themselves outside the binary, i.e. split, gender system. Since the pronouns "she" and "he" are gender-related in the German language , some non-binarys prefer other forms such as "she / he" or the English "they / them" and mark this on Instagram in square brackets after their name. We have adopted this representation for this article.

But how do I best address non-binaries? Because there is no one answer, we talked to Markus Ulrich [er] from the Lesbian and Gay Association and Non-Binary Cato [she / he] and Youtuber * in Robin [they / them] about it. We asked them what to look out for and why it is important to finally include non-binary people in our language.

PULS: How do I best address non-binary people?

Cato: Simply with a friendly "Hey you". Or more formally, of course, "I greet you". One should simply avoid gender-specific addresses such as "Mr. ..." or "Ms. ...". Apart from that, there are still many different forms.

Robin: There can be no general answer to this, because non-binary people use very different forms of address and pronouns. Just ask them how they would like to be addressed. In addition, it helps if you avoid gendered pronouns, salutations, and nouns.

Markus: I believe that a lot of non-binary people are used to the question and also want to ask: How can I speak to you / her? And people usually have an answer ready because they deal with it every day.

Is it okay to be insecure?

Cato: Society has not really made it yet that we exist as we are. That's why I can fully understand if this is unfamiliar or if you ask yourself: How do I address people and where are the faux pas? Because if you pay attention, we talk a lot about gender.

Robin: It would be a shame if fear blocks all contact. When you mispronounce someone, the most elegant solution is often a short, calm apology and correction, without much further ado. What is really awkward is very verbose apologies or hoping that a person who is trans and / or non-binary will not have heard them by now.

Markus: The question is always how fear of contact is expressed. If you ask the non-binaries with openness and genuine interest and then accept that people don't want to answer these questions, that's perfectly fine. Even with the court ruling on the third option, many only realized that there are more than two genders. In this respect, ignorance is understandable, the only question is how I deal with it.

What should you watch out for with pronouns?

Cato: It's best to just ask for the pronoun next to the name. Personally, that's not that important to me, but some people, for example, attach great importance to her / him. And if you don't know the pronoun, you can just repeat the name.

Robin: There can be no general answer to this either, in English it is often "they " used when the gender of a person is unknown - this has not yet become established in German. The only thing that helps here is to ask, preferably also about the pronoun, but not about a "preferred" one. This gives the impression that the chosen pronouns are negotiable in some way by non-binary people. I often hear of concerns about asking someone else's pronouns as if it were an insult. I always answer: Yes, I understand what you mean and also decide depending on the situation whether the moment is just safe enough for it. Unfortunately, that sometimes has to be taken into account.

Markus: A good way, for example, is to say your own pronoun in introductions. So: "I'm Markus Ulrich, personal pronoun he." With this I show that I have the topic on the screen and I do not always hand the responsibility over to the person who has to indicate their "special role". You take the pressure off those affected and make it a matter of course.

What are absolute no-gos?

Robin: Consciously refusing to use self-chosen addresses, pronouns or names is an absolute no-go. The trivializing when referring to trans- and non-binary rights, for example, of "trends" or "special snowflakes", too. If you notice that in your environment, I would definitely intervene.

Markus: One shouldn't ask, "What's your real name?" or "What's your name before?" Physical questions are also difficult, especially when you are just getting to know each other. It is nobody's business what s / he wears in their pants or what types of surgery have been done. You should simply accept the limits of your counterpart.

Cato: To be called "it" is not possible because I am not an object, but a person. And apart from that, this ignorant ignorance: When people don't allow themselves to be talked about and insist that there are only two genders and that it depends on what you have in your pants. I can't handle that.

Why is it important that we include non binaries more in our language?

Markus: It is a recognition of the gender diversity that we have in our society. It doesn't hurt anyone either. It's about appreciation and equal cooperation. These are principles of living together that we can also translate into language.

Cato: More and more people are realizing that they also feel like non-binaries, simply because there is more information about them. I think we should take it into account in our language. Actually, it doesn't really matter what kind of gender someone is. The main thing is that the person is happy.

Robin: Language changes and shapes our reality significantly. Non-binary people and the forms of discrimination against them must become visible so that we can tackle these power structures in everyday life. In addition to any obvious exclusion of non-binary and trans people, this also includes subtle forms such as silencing, where those affected by social structures prefer to remain silent rather than defend their rights.