What is the definition of sexual harassment

Harassment can be understood as a specific form of discriminatory treatment, in which a person’s dignity gets insulted by undesirable behavior due to a characteristic worthy of protection. This creates an environment of intimidation, hostility, humiliations, degradations or insults. The disadvantage can happen intentionally or unintentionally. Harassment can never be justified in objective terms.

What is sexual harassment?

Sexual harassment is a specific form of harassment and a sexualized form of discrimination. It includes every one-sided and undesired act of behavior with a sexual reference / intention, which hurts the person’s dignity. Through sexual harassment an environment can be created, which is characterized by intimidations, hostility, humiliations, degradations or insults. People affected perceive this behavior as disrespectful and unacceptable.

Thereby it is essential, how the affected person perceives the act. Sexual harassment is not a mutual flirt or a desired initiation of contact, but an exertion of power and control. One person does something with a sexual reference, without asking the other person for permission or even though the other person signalized, that she * he is not okay with that. It is a one-sided behavior and an exercise of power with sexual means. That is why we talk about "sexualized violence". Sexual harassment can be, for example used by men as an instrument to unsettle women with respect to their further professional and academic endeavors.

Sexual harassment is a largely tabooed issue, which is still covered with shame. People affected feel violated in their dignity, humiliated and reduced, because they have been treated like a passive object. Often it occurs with a sense of helplessness, because the situation could not be controlled in a self-determined way. The feeling of not having put up a fight in a reasonable manner due to the situation can be incriminating. People affected can also have feelings of guilt. But there is no justification for sexual harassment and affected people cannot be blamed or made responsible for it.

Who can be affected by sexual harassment?

Sexual harassment largely concerns women, but also men and people, who do not locate their gender in neither category can be affected by it. The perpetrators are mostly men, but people of all gender can sexually harass. Harassments can occur between people of various hierarchical levels (e.g. between a student and a professor, a staff member and a supervisor), but also on the same hierarchical level (e.g. between fellow students). Sexual harassment is particularly severe when it happens in relation to exploitation of dependency or under threat of personal or career-related disadvantages.

Examples for different forms of sexual harassment that can occur at university: 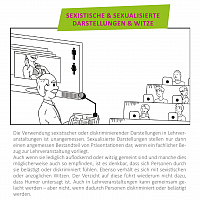 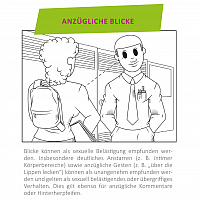 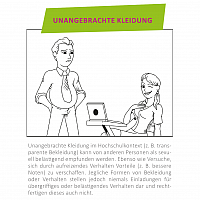 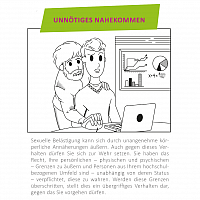 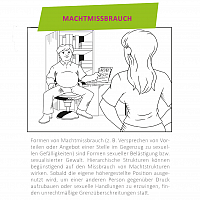 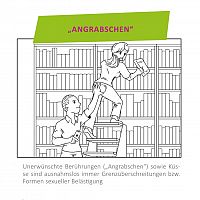