Can I burn incense sticks every day

I bought my first incense sticks when I was 14 and I will never forget how my mother forbade me to light them after the first one. After that, I was in a bit of an ambivalent and prejudicial relationship with smoking, unless it was about smoked foods! The latter have little to do with ritual incense but why I started smoking again after years is worth a post.

Smoking is actually known above all as an accompaniment to all kinds of religious rituals. Incense in cathedrals, incense sticks in temples and sage to cleanse people, animals, places and objects. The use of incense in such contexts, however, triggers more rejection and judgment in most of the people I know than is probably necessary. Incense often comes with its set of esoteric gurgles and with it the nasty aftertaste of cheating that I talked about in relation to tarot. Smoking is much older and more spiritual than many people know. Already with the Romans there is evidence that they sent requests with smoke to their gods, but smoking does not have to be exclusively related to religion or food flavoring. 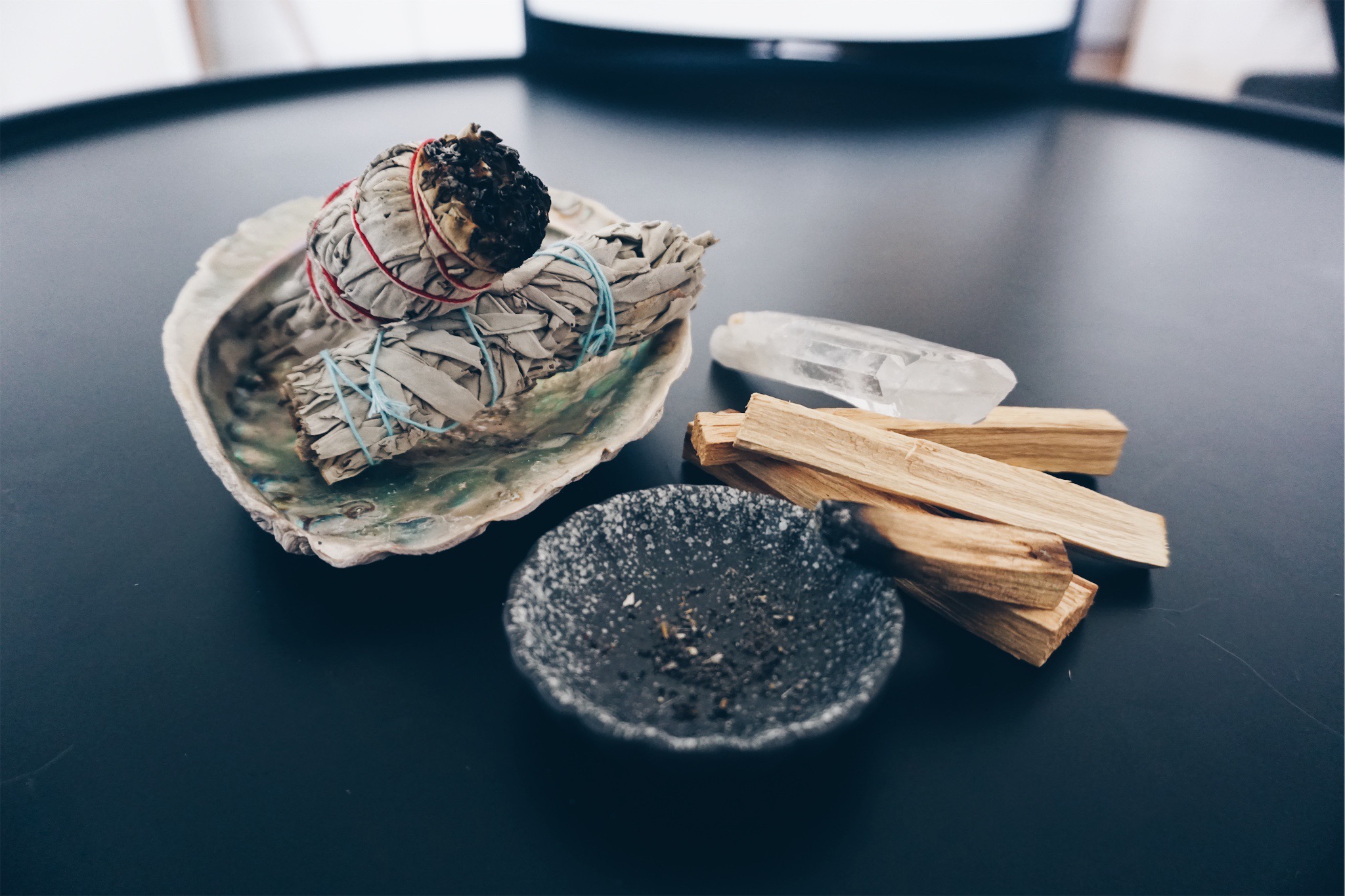 Sure, not everyone likes the smell of burned or incense. In Jan, regardless of whether it comes from the kitchen or my Post LARP Con clothes, it always triggers unrest or rejection and of course, not every burn smell is good in principle. I like the smell of campfires, matches, or smoked foods best. I feel comfortable with the smell of burned wood and many of the memories I have of campfires have been good since I was a young child. It reminds me of songs and stories while camping and on LARP weekends. He immediately puts me in the detached feeling of togetherness, nature and hiking snacks and liquor bottles. Whenever I sit by a fire, I am not at home, mostly far away from the Internet and my phone, surrounded by people I like.

For me, campfires are probably the most beneficial of all and the smell of smoke reminds me of them. Smells have a strong influence on many people and manage to form moments and feelings. It does not matter whether it is really burning or the modern version of scented oils, scented candles or air fresheners. Many use smells to feel more comfortable and also to create or remember a special feeling. Which smells you associate with what is probably very personal, but the scent of lavender should help you to find a more peaceful sleep and it is not for nothing that scented candles are standard in many households. 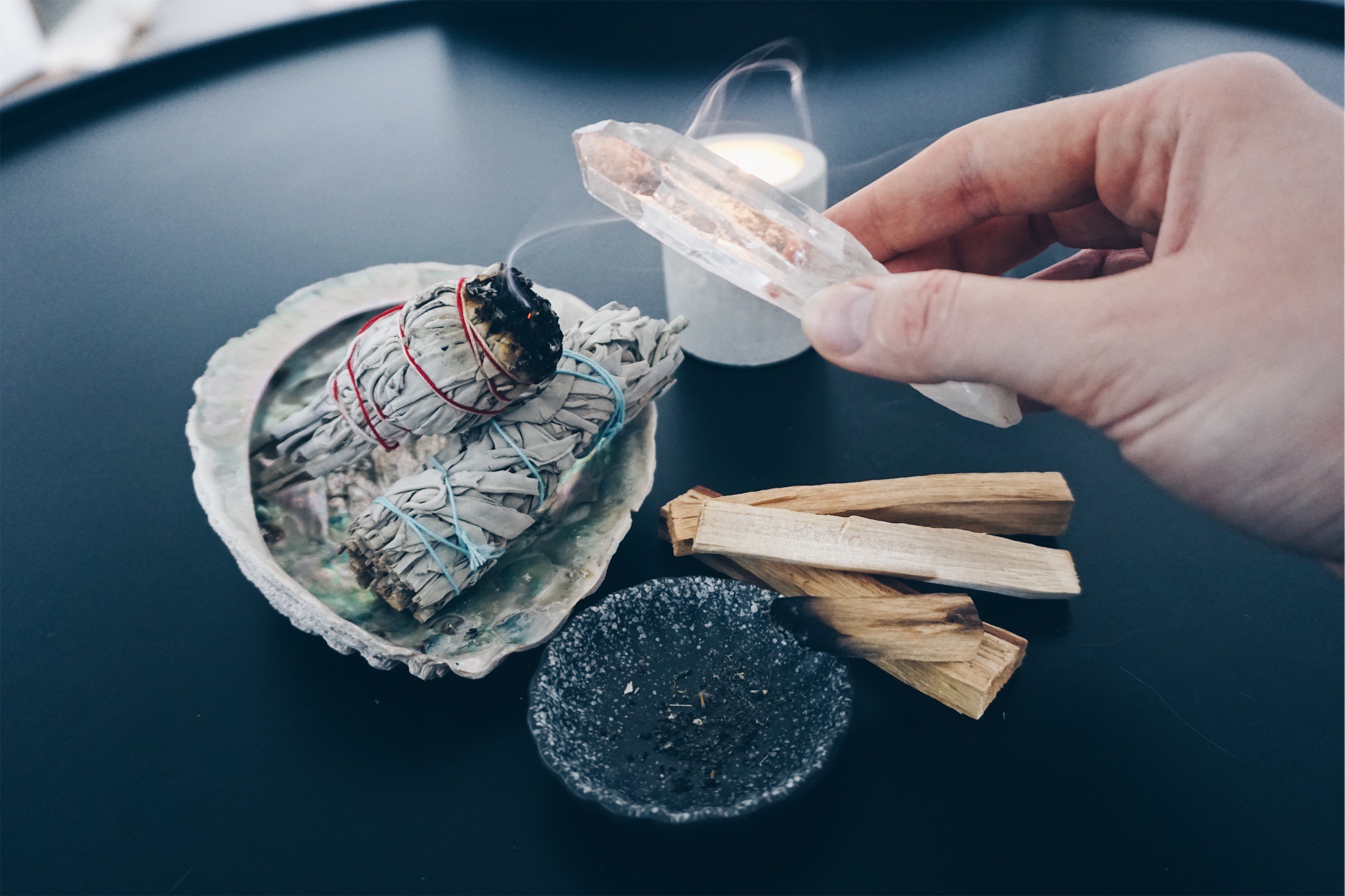 My ritual about smoking

As mentioned earlier, smoking is often associated with religions, and not without good reason. It has been proven that incense has been used in a wide variety of religious rituals for many centuries to send messages to the gods, to get intoxicated and to adjust those present to the extraordinary situation. You should leave your actual thoughts and worries behind and get involved with what is important in the moment. Smells accompany this process and in my opinion that is the essence of smoking. I have never experienced incense in relation to religion, except for the one unspeakable time at communion when I had to cough terribly from incense and apart from the modern feel-good equivalent of aroma oil or scented candles, I have not touched any incense for a long time, except for so many incense sticks in a monthly subscription box were that I couldn't help but try again.

I didn't have a chopstick holder, so instead of the wick I put it in a tea light. Unlit incense sticks often smell good, but never like the actual smoke when smoldering and I was always ready to smother the little glowing point in the next flower pot if necessary! But I was lucky, and as soon as the burnt thing went away, the stick left a pleasant scent of roses. Then I lit incense sticks irregularly, but again and again, and began to combine this time with self-care unplanned. I then made tea, took a book or time to blog, subconsciously began to associate a ritual with the smell of the incense sticks without a target-oriented plan, in which I reserved extra time that was good for me. 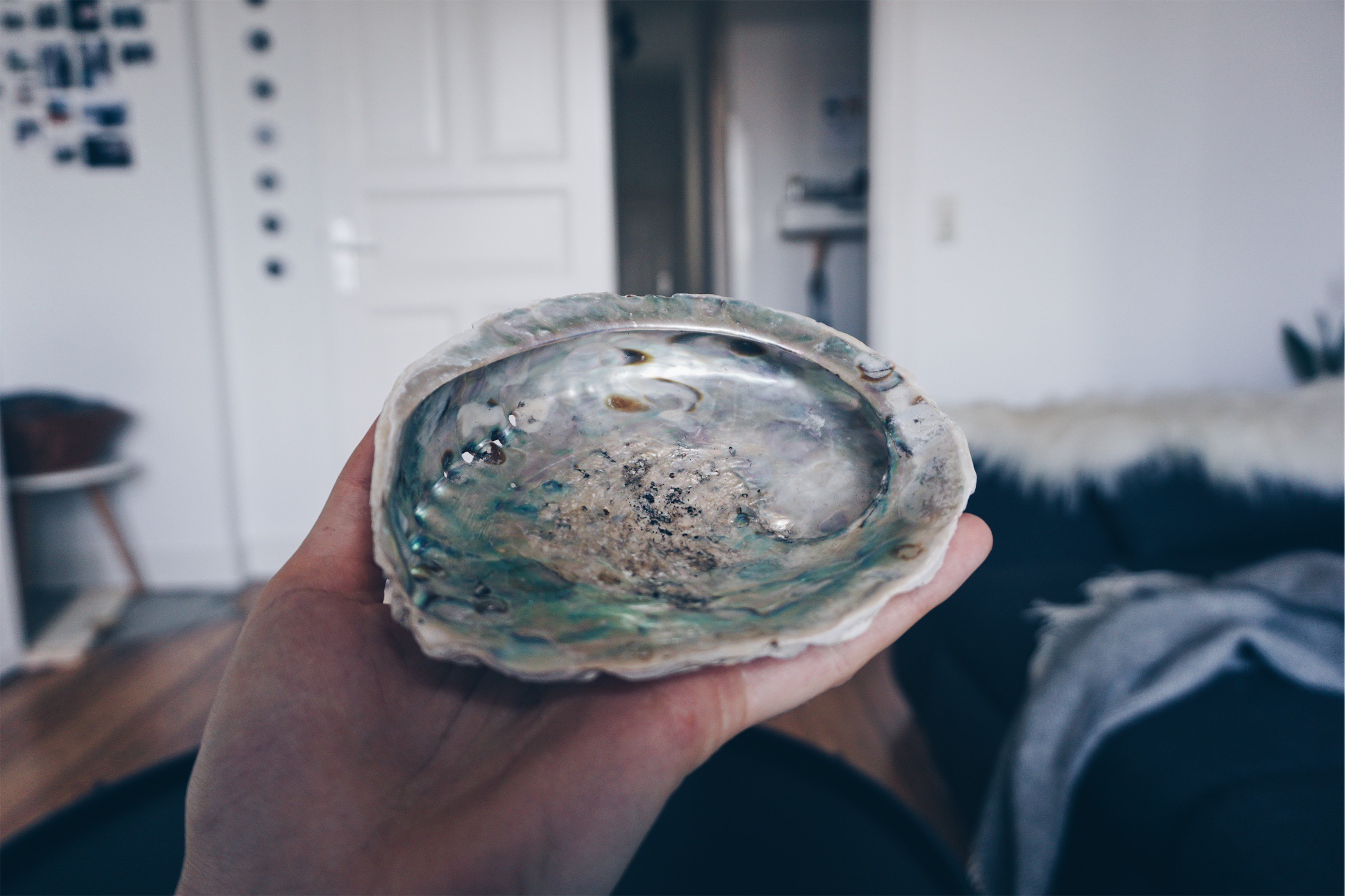 But not every incense stick is great. I also learned that I don't like to eat while the incense sticks are on and more than one a day is too much for me. I cannot combine every kind of incense stick aroma with relaxation, some smell indefinably oppressive or too perfumed. In most cases, however, they put me in a mindset that distracts me from everyday life and sometimes, especially now, I need this more relaxed time for myself to which my head adjusts effortlessly when I light an incense stick.

But even if incense sticks are already too deep in the esoteric swamp for some, that is not the final level of incense. For my birthday a friend gave me a beautiful clam as a smoking bowl and Palo Santo wood as well as a bundle of sage to smoke. I discovered all of this from a different and even more traditional side. There are many ways to smoke, such as resins, cones or chips. That feels even more mystical than incense sticks. I have therefore reserved smudging for the moments when I lay cards or runes, meditate or want to compensate for deep restlessness, because then I smoke more consciously than usual and symbolically cleanse my surroundings and myself through rituals.

The very lovingly packed and incredibly good-smelling Smudge Kit photographed here is available from my wonderful friend Anna Frost and for you in her shop. It consists of a sage smudge stick, a rock crystal, Palo Santo wood, short instructions and a bowl to catch the ashes. Perfect for discovering a ritual for yourself. A ritual that calms, cleanses and grounds. 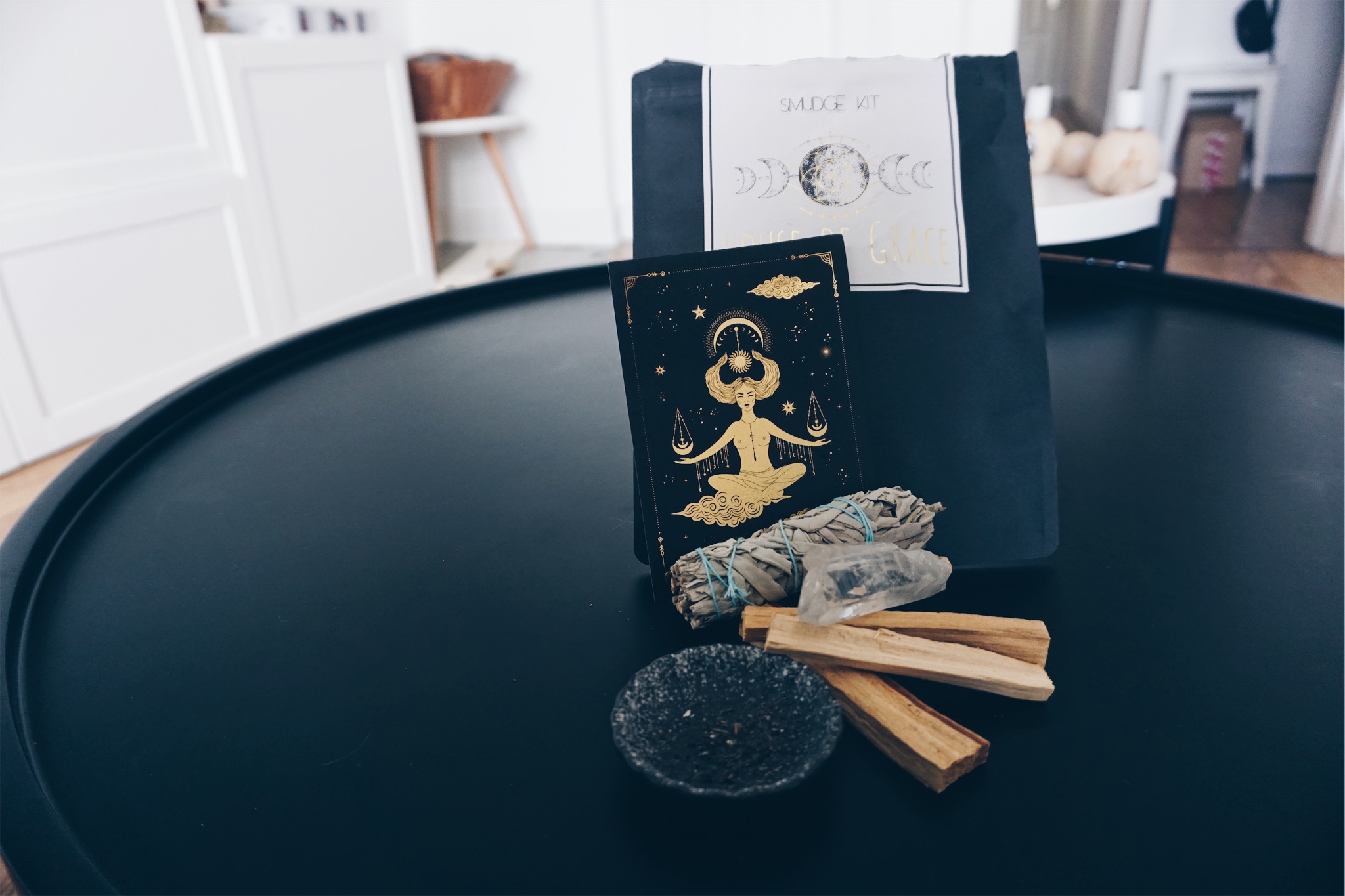 Mysteries and facts about smoking

Articles in lifestyle magazines and blogs are often about taking away its mystical, strange aftertaste from smoking and normalizing its medicinal and spiritual benefits. During my research I found countless of these mystical but not esoteric contributions, which often throw around dangerous half-knowledge and jump on the mystical hype. So here too the rule applies that you use common sense to question the advertised effects. Smoking a bundle of rosemary, sage, arnica never cures cancer. In general, smoking is rather harmless. As with tarot, you should always decide for yourself whether you feel comfortable with giving in to the mystical or not. Smoking is also usually a support and symbolic of something. 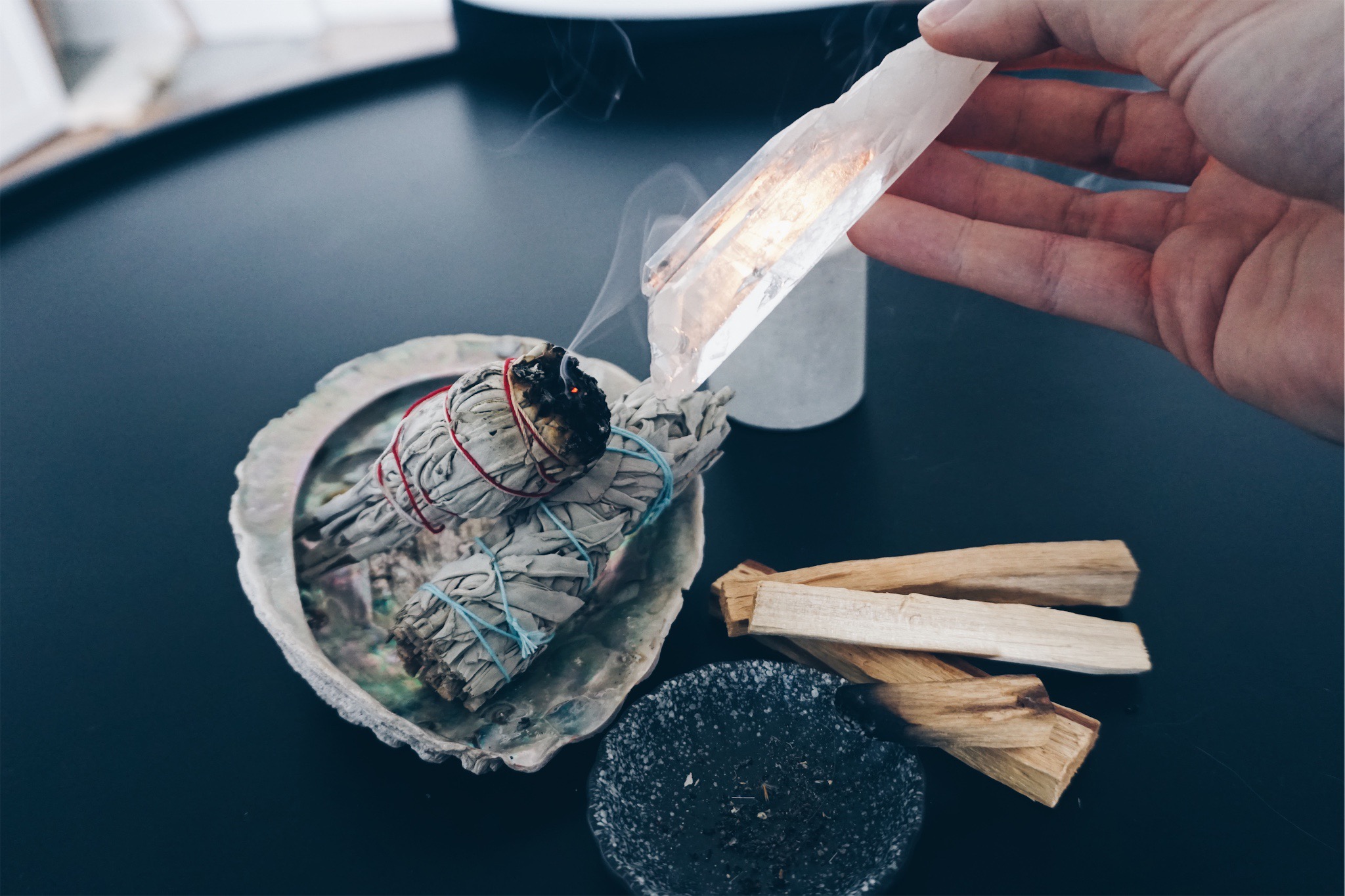 However, the origin of these rituals is often deeply anchored in culture. The burning of Smudgesticks or bundles of dried herbs (mostly white sage or mixtures), for example, originally comes from the culture of the natives of North America and the belief that smoke drives away negative energies, i.e. cleanses. The four elements reflect the bond with nature. Clam shells are used as a censer and represent the water. The incense itself has grown out of the earth, the flame that creates the smoldering embers is the fire and the smoke that arises represents the air. The smoke is then spread on, over, in or around the living being, place or object to be cleaned, with the help of a pen or hand, in order to symbolically cleanse. The remaining ashes are then buried in order to give them back to the earth and to release the negative energies. For example, Native Canadians describe this ritual here.

Due to the cultural appropriation of this practice and the plants used, I would like to ask you, if you are not indigenous to North America, to choose other ways of smoking in order to respect the culture from which the smoking comes in this way. After further research of my own, I will not smoke with sage or Palo Santo wood in the future. 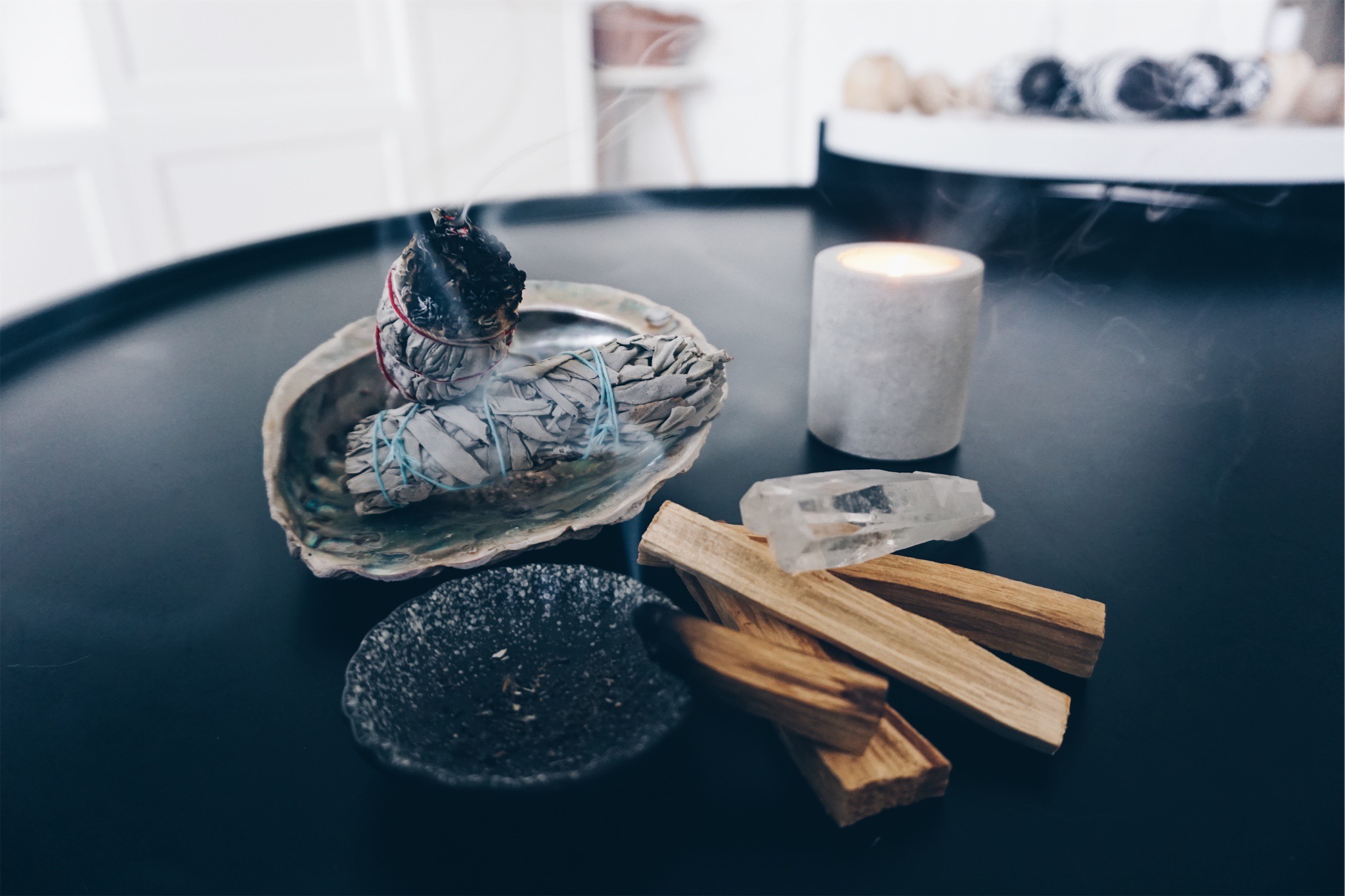 In Asia, incense sticks are lit in large quantities at the entrances of temples and altars in sand bowls to consciously support meditation and the cleaning of rooms and souls. To carry prayers to the ancestors, to appease the gods and to pay homage to them. A nice, easy to romanticize thought, I think.

But it has also been proven that inhaling the smoke that is produced when smoking is harmful in large quantities. Not only for yourself, but also for roommates and animals that live with you in your home. Not everyone likes the smell (Jan usually tolerates it up to a certain extent ..), which is why it is important to remember that you shouldn't smoke every day, especially if you are prone to bronchial or asthma problems. Always smoke responsibly and in well-ventilated rooms!

I have not yet dealt with medical smoking and I have only found scientific evidence for the effectiveness of the actual cleaning of the air through sage smoking in the form of further articles, one of which explains that the smoke is a Ion reversal is said to contribute. You can find information about this here

In summary, it can be said that smoking is used for a wide variety of reasons and in many cultures and religions it is used to support rituals. The effect of medicinal herbs and oils has been scientifically proven in part, but does not want to be used carelessly, especially not if one does not have sound background knowledge and scientifically sound evidence. Smells obviously influence our perception for both good and bad. As is so often the case, one should not be too quick to judge and soothe the stigmata of smoking. Everyone must deal responsibly with the topic and never harm anyone or let incense smolder unheeded. Nevertheless, I would like to repeat once again that you should not spend any money on esoteric services and that you have to inform yourself thoroughly beforehand.

If you have any questions or want to know or tell something else about smoking, please write to me on Twitter or Instagram!